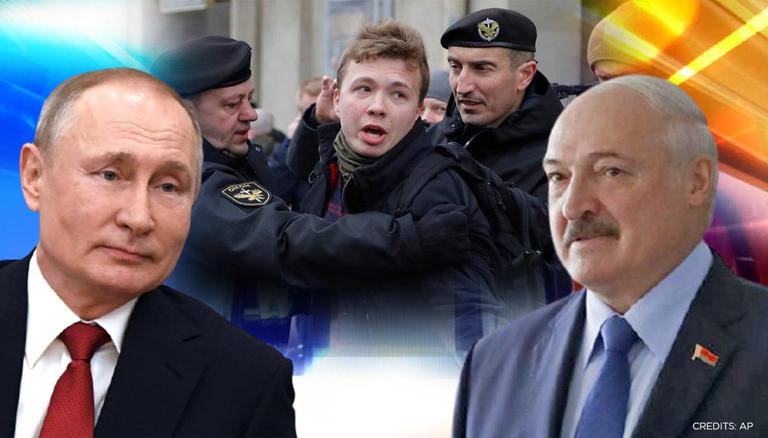 
In the aftermath of the controversial detention of Belarusian opposition activist, Roman Protasevich earlier this week, Russian President Vladimir Putin on May 28 told Belarusian President Alexander Lukashenko that criticism for Minsk is an “outburst of emotions.” Protasevich and his partner, Sofia Sapega who is a Russian national, were taken into custody on May 23 after a Lithuania-bound Ryanair flight from Greece was grounded in Mink due to a bomb scare. Days after the incident, while Ptotasevich and Sapega are still in detention in Minsk, Putin met with Lukashenko on Friday as the Belarusian leader is in Russia on a working visit.

As per the record of the meeting, Kremlin said in a statement that Putin said, “We have things to discuss even without these events. I mean to say that in the first quarter of this year, our trade grew by a considerable 18.4 per cent, and Russia remains a key trade and economic partner of Belarus. This is a good trend, and it is important to keep it going along with the Government's active work.”

Putin’s support for Lukashenko came as the European Union (EU) agreed to impose more sanctions on Belarus including a ban on its airlines from using airspace and airports of the EU member states. Meanwhile, the United States also re-imposed full blocking sanctions against at least nine Belarus-based enterprises and the US Treasury Department also said that it will set a new Executive Order for US President Joe Biden to review that will provide more power to Washington to impose sanctions on Lukashenko’s government.

Meanwhile, Greek Prime Minister Kyriakos Mitsotakis has said that there is “no evidence” that Belarusian KGB or any other secret service agents were on board the Ryanair flight that was diverted to Minsk while on its way from Athens to Vilnius, in order to arrest a dissident among passengers. Mitsotakis said in an interview with Germany's Bild tabloid, “We have no indication there were KGB agents or any security service agents on board the plane. None. Zero. And we investigated it very carefully.”

Greek Prime Minister’s remarks came amid the intensifying doubt over Belarus authorities’ claims regarding the alleged bomb threat and international criticism has been mounting on Minsk. Sofia Sapega, a Russian citizen and the girlfriend of Roman Protasevich, a Belarusian journalist who is a staunch critic of Alexander Lukashenko were detained in Minsk after a bomb scare on a Ryanair flight that was originally bound from Athens in Greece to Vilnius in Lithuania.

“We haven’t seen credible evidence that the Belarusian claims are true,” Proton said in a statement. “We will support European authorities in their investigations upon receiving a legal request.”

WE RECOMMEND
Lukashenko seeks Putin's support amid flight spat
Putin claims that Russians will 'knock out teeth' of those who attack their country
US largely defends itself from latest Russian hack, will not affect Biden-Putin summit: WH
US President Biden to meet Russia's Putin, whom he called 'a killer', in Geneva on June 16
Putin calls Russian COVID vaccine 'reliable and safest', urges citizens to get immunized