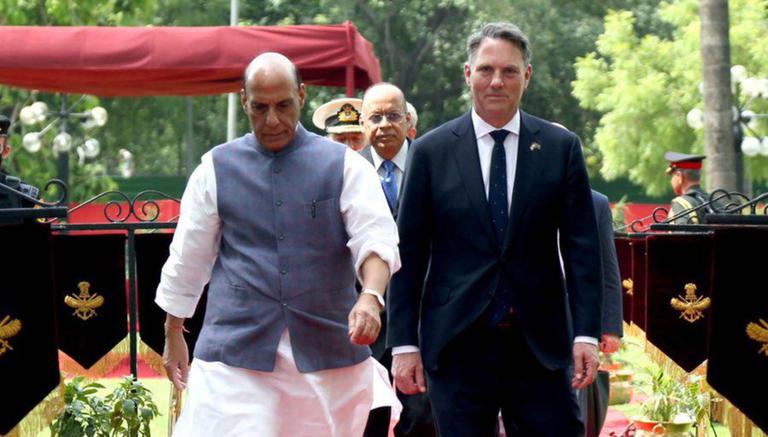 
Union Defence Minister Rajnath Singh on Wednesday said that Australia is a proven and a trusted partner of India and both the countries share the democratic values for a free and open Indo-Pacific. Addressing the first bilateral meeting with Australian Deputy Prime Minister and Defence Minister Richard Marles, the Union Minister also said that the ties between New Delhi and Canberra were enhanced to a comprehensive strategic partnership in June 2020 during the Prime Minister-level virtual summit.

Singh said, "India and Australia share democratic values, having common visions for a free and open Indo-Pacific." The Union Defence Minister also said that close defence and security cooperation is an essential factor of stability in the Indo-Pacific region. Singh added, "Australia is a key partner in India's Indo-pacific Ocean initiative".

Following the meeting with Marles, Singh informed on Twitter that he had “excellent deliberations” with the Australian Deputy PM. He added, “We reviewed the full range of defence & strategic cooperation between both the countries and paved the way for deepening it further.” Marles also echoed a similar experience after the first bilateral meeting with the Union Defence Minister and called it “instrumental” in advancing the defence ties between both the countries.

Had excellent deliberations with Australia’s Deputy Prime Minister and Minister for Defence Mr. Richard Marles in New Delhi today. We reviewed the full range of defence & strategic cooperation between both the countries and paved way for deepening it further. @RichardMarlesMP pic.twitter.com/SzSf0VhS6b

Marles, who is on a three-day visit to India, had also received the guard of honour at Vigyan Bhawan after he laid a wreath at the National War Memorial in the capital earlier on June 22. Singh received Marles before starting their first in-person bilateral meeting on June 22.

EAM Jaishankar also said that he was “delighted” to meet Marles and revealed that both diplomats agreed on the importance of strengthening India-Australia strategic partnership to address the mutual challenges.

Agreed on the importance of strengthening our Strategic Partnership to effectively address contemporary challenges. pic.twitter.com/5QH0T9Xspb

A productive discussion across the gamut of our Comprehensive Strategic Partnership, including shared commitment to build together a stronger & resilient #IndoPacific.@AusHCIndia https://t.co/axbObbgnzG

Marles even flew with the Indian Navy on Wednesday afternoon. Hailing the Indian Navy, the Australian Defence minister said, “An incredibly professional outfit, proving their experience & dedication to service.” The engagements came as Australia’s Deputy Prime Minister and Defence Minister Richard Marles arrived in India on Monday. He hailed New Delhi as Canberra's “top-tier partner” and a “close friend”.