In a recent study published in the Journal Earth it was revealed that microplastic pollution has been found near the summit of Mount Everest.

In a recent study published in the Journal Earth it was revealed that microplastic pollution has been found near the summit of Mount Everest, which is the highest peak in the world. Although increasing numbers of visitors have boosted the economy, the negative impacts of tourism can be seen on the environment. The study revealed that tiny plastic fibres were found within a few hundred metres of the top of the mountain.

Over 50 years ago, Mount Everest was described as “the world’s highest junkyard” and the entire mountain was described as  “the highest trash dump in the world” as it has accumulated old tents, fixed ropes, used oxygen bottles, human waste, tins, glass, and paper left behind from previous expeditions. The maximum amount of plastic was found in the base camps. The study suggests that the fibres were most likely created from clothing, tents and ropes used by mountaineers. 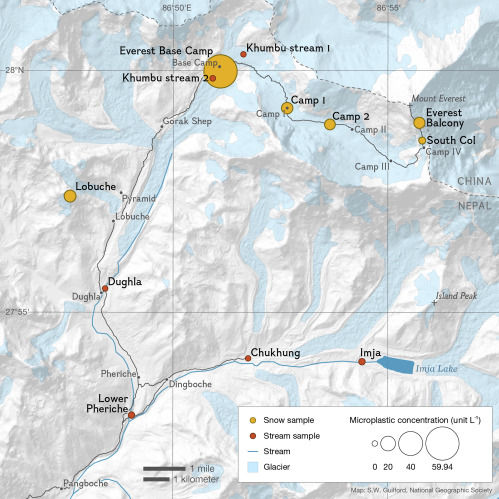 (The radius of each point is in relation to the microplastic concentration. Image Credits: Cell.com) (A selection of microfibers found in snow samples from Mt. Everest Balcony (8,440 m), which are consistent with fibers from outdoor clothing. Image Credits: Cell.com)

The quantity of the microplastic has not been studied yet. The study says, “To establish the concentration of MP contamination on Mt. Everest, an assessment of MP in stream water and snow samples was undertaken during April–May 2019, including up to the Balcony”. These samples were then carefully quantified and individual microplastic fragments were described based on their physical characteristics. The study reported the highest altitude MP ever recorded.

The study said, “In order to protect the environment and communities downstream, individuals who participate in adventure travel and extreme sports, like trekking and climbing, must continue to minimize their impact, especially when concerning harmful debris”. It also warned that with the increasing number of trekkers and climbers, the accumulation of plastic is expected to rise. It further urged to focus on robust evidence that informs appropriate solutions.