Russian envoy to the US Anatoly Antonov on Sunday called on the democratic forces to restore peace and stability in Kazakhstan as civil unrest worsened. 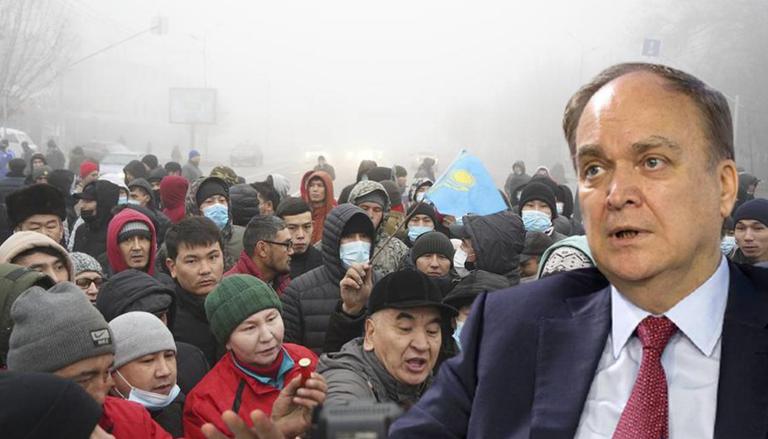 
As civil unrest in Kazakhstan worsened throughout the week, Russian envoy to the US, Anatoly Antonov, on Sunday, called on the democratic forces to restore peace and stability in Kazakhstan. Dubbing the situation as a "colourful revolution" by "thugs and robbers", the Russian ambassador asserted that Kazakhstan has "come under attack of radicals manifesting dehumanising ideologies".

Antonov's assertions come after at least 164 civilians were killed in the anti-government civil protests that turned violent over the week.

"Thousands of jihadis and looters with human-hatred ideology tried to undermine the constitutional order. They used weapons against civilians and inflicted damage to public and private property," Ambassador Antonov said in a statement published on the Russian Embassy's Facebook page.

Accusing the US of fuelling extremist ideas in the region, Antonov said, "I'd like to note that all this is happening after the American escape from Afghanistan."

He also stressed that the democratic forces in the world to help Kazakhstan recover from the turmoil without trying to further deteriorate the situation. It is pertinent to mention that Kazakhstan President Kassym-Jomart Tokayev on Friday permitted the deployment of the Russia-led Collective Security Treaty Organisation (CSTO) to help the Kazak military restore constitutional order in the country.

"All decisions on sending the collective forces to Kazakhstan were made according to the CSTO statutory documents and at the request of the legitimate president of the country," Antonov stated.

Kazakhstan has been on the boil for the past one week after thousands of people took to the streets to protest against the skyrocketing fuel prices in the country. The unrest spread across cities quickly as demonstrators set state buildings on fire and stormed the international airport in Almaty. Police fired tear gas and stun grenades to disperse agitators from the main square in Almaty City Center, CNN had reported.

In the wake of the protests, at least 164 have been killed, including three children and at least 5,800 people have been detained since January 2, the office of the President informed on Sunday. At least 103 deaths were reportedly in the country's largest city, Almaty.

The interior ministry had earlier told state media that around 1,300 security officers were injured during the unrest. Meanwhile, authoritarian President of the country Tokayev on Friday ordered "shoot to kill without warning", further escalating public anger and manifold deterioration of the crisis.