South Korea's President Yoon Suk-yeol and his US counterpart Joe Biden are set to visit a key Air Force operations centre during the latter's visit to Seoul. 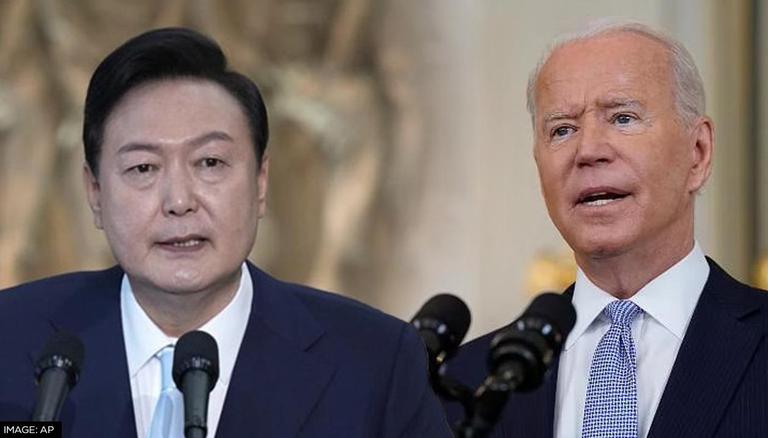 
South Korea's recently appointed President Yoon Suk-yeol and his US counterpart Joe Biden are expected to visit a key Air Force operations centre during the latter's visit to Seoul. According to the Yonhap news agency, the joint visit has been arranged as the allies aim to strengthen security coordination in the wake of North Korean provocations such as a long-range ballistic missile test and nuclear test. On Friday, the US President embarked on a three-day visit to South Korea.

South Korea's presidential office said in a statement that both leaders will pay a visit to the Korean Air and Space Operations Center (KAOC) at Osan Air Base in Pyeongtaek on Sunday, May 22. It further stated that Suk-yeol and Biden will be briefed about the KAOC's operations during their visit. According to Kim Tae-hyo, the first deputy chief of South Korea's presidential National Security Office, Presidents of both countries also intend to hold a combined schedule under the theme of "economic security and security" during Biden's three-day visit.

Meanwhile, North Korean leader Kim Jong-un recently warned that his country would use nuclear weapons as a preemptive strike, and the regime has launched a series of missile tests. During the military day parade on April 25, Kim Jong stated that Pyongyang will "continue to enhance and develop nuclear capabilities at the fastest pace."  North Korea has been rapidly increasing its missile tests as part of its weapon development programme. From hypersonic to short-range, immediate, and long-range missiles, the country's Supreme Leader Kim Jong has mostly overseen the launch of such missiles.

It is pertinent to mention here that North Korea has so far conducted six nuclear tests, all of which have taken place at the   Punggye-ri test site . On May 6, the US State Department announced that North Korea is preparing its Punggye-ri test site and could conduct a test there as soon as possible. Meanwhile, South Korean President Suk-yeol stated that North Korea's nuclear weapons development programme poses a threat not only to South Jorea's national security but to the entire region of Northeast Asia. He also encouraged Pyongyang to pursue "complete denuclearisation" in order to avoid further aggravation of the Korean Peninsula situation.

WE RECOMMEND
New audit reveals around half of US President Biden’s 22.2M Twitter followers are 'fake'
Biden in Asia: New friends, old tensions, storms at home
Biden says Finland, Sweden have ‘full, complete backing’ of US
US Senate passes $40bn aid package for Ukraine; Biden to sign bill into law in South Korea
Biden has an eye on China as he heads to South Korea, Japan