Saudi Actor Says Prisoners Should Be 'testing Field For New Medications', Not Animals

Saudi actor caused a stir online by proposing that prisoners who are charged with charges related to security should be used for testing instead of animals.

A Saudi actor caused a stir online by proposing that prisoners, who are charged with charges related to security, should be used for medical experiments instead of “rats and monkeys”. Maram Abdul Aziz even said that if she had the power, she would not “waste food, drinking and rehabilitation” on them. According to her, instead of wasting the kingdom’s resources, the authorities should turn them “into a testing field for new medications” so that the “country would benefit from them”. She also added that animals have “done no harm” to the country.

However, the backlash on the actor grew severe and many asked that why doesn’t she herself step-up for testing especially during these times when the world is battling with a pandemic that has infected over 1.4 million, with no definite vaccine. Not only did Aziz delete the previous tweet that led internet users to compare her to Adolf Hitler but also said that she is contributing to drug and vaccine experiments by donating stem cells and will also donate all her organs after death. 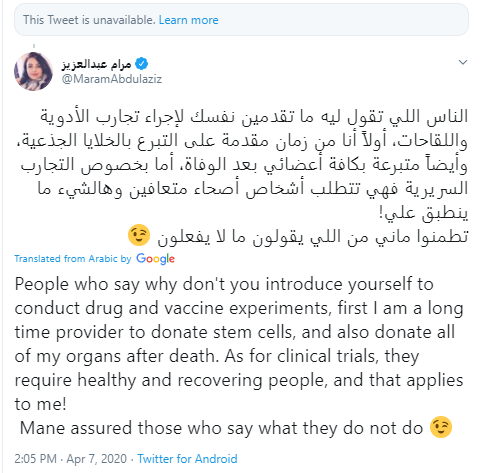 As of April 8, Saudi Arabia has recorded 2,795 confirmed cases of coronavirus with 41 fatalities. After originating from China’s “wet markets”, the coronavirus has now claimed over 82,096 lives worldwide as of April 8. According to the tally by international news agency, the pandemic has now spread to 209 countries and has infected at least 1,431,973 people. Out of the total infections, 302,209 have been recovered but the easily spread virus is continuing to disrupt many lives. Major cities have been put under lockdown in almost all countries and the economy is struggling.

The World Health Organisation (WHO) had declared the coronavirus as a global pandemic on March 11 while the virus has now spread to all continents except Antarctica, resulting in thousands of deaths worldwide. WHO chief Tedros Adhanom further even urged all nations to get very serious over the issue and take all necessary measures to contain the virus from spreading at this rate. Tedros said, that the word 'Pandemic' cannot be used lightly or carelessly due to its strong connotation.

Read - Saudi Expects Up To 200,000 Virus Cases Within Weeks: Minister