According to a Guardian report, Princess’ legal adviser Henri Estramant and Lucy Rae of the British human rights organization Grant Liberty in the letter stated that the Saudi princess’ life depended on the release'. The content of the letter, as cited by the Guardian read: ‘We are begging you to intercede. As they are citizens of the Commonwealth we believe you have a moral obligation to fight their corner’. The mother and daughter sought dual citizenship of the island of Dominica, a Commonwealth nation, and Saudi Arabia in the year 2015. Sources of Guardian revealed that Princess Bismah applied for citizenship under the citizenship-by-investment program, as she left Saudi for a travel purpose 2 years ago. 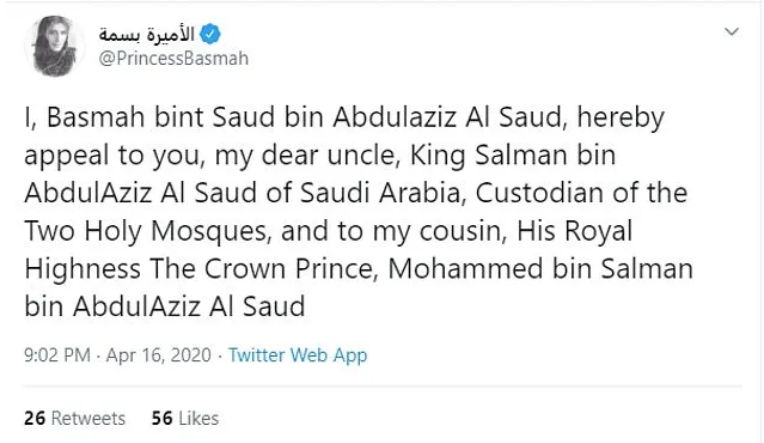 "I am beseeching my uncle, Custodian of the Two Holy Mosques, King Salman bin AbdulAziz al-Saud, and my cousin, Crown Prince Mohammed bin Salman, to review my case, and to release me as I have done no wrong," a tweet from the Saudi princess account read.

Read: Joe Biden Says He Will 'make Announcement' On Saudi Arabia On March 1

Went 'off the radar'

Report of Saudi princess ‘missing’ was first broke by German public state-owned international broadcaster, Deutsche Welle. The newspaper reported that the Saudi princess went off the radar due to alleged detainment by the de facto leader Saudi crown prince Mohammed bin Salman bin Abdulaziz Al Saud, known as MBS on false charges of trying to flee the country and acquiring a ‘fake passport’. The prominent businesswoman and activist was held in detention and was kept under surveillance and wasn’t allowed to communicate from inside the prison.

Although, in her justification later, sources close to Princess Bismah told DW that she travelled to Switzerland for medical treatment and her documents had clearances to fly out of Jeddah on a private plane, rented for $87,000 from Redstar Aviation on December 18, as seen by the agencies’ sources. However, the princess disappeared. Months later, tweets fired from her official verified handle, stating: "I am currently being arbitrarily held at Al-Ha'ir prison without criminal, or otherwise any charges against my person.” Another one read: "My health is deteriorating to an extent that is [severe], and that could lead to my death. I have not received medical care.” Saudi Arabia's Ministry of Foreign Affairs, the Royal Embassy of Saudi Arabia in Washington, DC, and the Royal Embassy of Saudi Arabia in London never responded to the media reports why was the Saudi princess forecefully held in the prison.