The daughter of North Korean leader Kim Jong Un who was recently seen in public for the first time at a missile launch site is his second child, South Korea’s spy agency told lawmakers Tuesday, as speculation swirled about his motives for bringing her to the attention of the outside world. 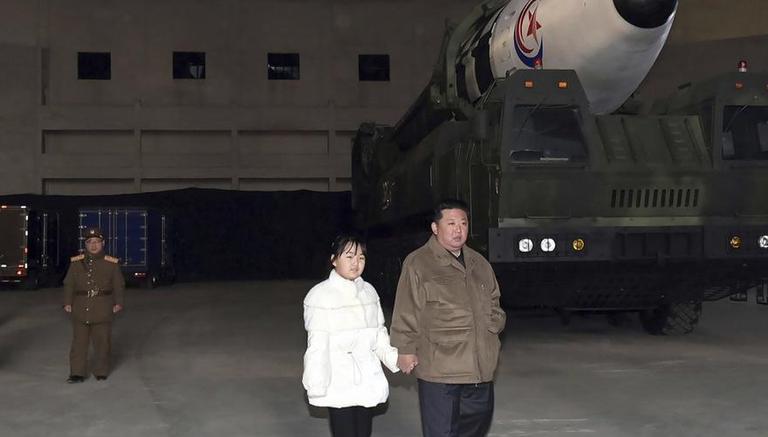 
The daughter of North Korean leader Kim Jong Un who was recently seen in public for the first time at a missile launch site is his second child, South Korea’s spy agency told lawmakers Tuesday, as speculation swirled about his motives for bringing her to the attention of the outside world.

On Saturday, North Korea said that Kim observed the launch of the country’s most powerful intercontinental ballistic missile -- Hwasong-17 -- the previous day with his wife Ri Sol Ju and their “beloved daughter.” State media released photos showing Kim walking hand-in-hand with a young girl clad in a white coat and red shoes past a massive missile placed on a launch truck, and watching a soaring weapon from a distance.

In a closed-door briefing at a parliament committee, South Korea’s National Intelligence Service, the country’s main spy agency, told lawmakers that it assesses the daughter is Kim’s second child named Ju Ae, Yoo Sang-bum, one of the lawmakers who attended the meeting, said.

Youn Kun-young, who also attended the NIS briefing, confirmed the substance of Yoo’s comments but refused to provide further details.

The daughter apparently is Kim’s child who retired NBA star Dennis Rodman saw during his trip to Pyongyang in 2013. After that Pyongyang visit, Rodman told the British newspaper Guardian that he and Kim had a “relaxing time by the sea” with the leader’s family and that he held Kim’s baby daughter, named Ju Ae.

It was the first time North Korea officially confirmed her existence. North Korea's state media didn't disclose the age, name and other details of Kim's daughter last week. South Korean media have speculated Kim married Ri in 2009 and that they have three children, who were born in 2010, 2013 and 2017, respectively.

Kim, 38, is a third generation of his family to run North Korea since 1948. He inherited power in late 2011 upon the death of his father Kim Jong Il.

Kim and his father were both first mentioned in state media dispatches after they became adults. Given that, the revealing of the daughter believed to be in her early teens came as a surprise to outside observers.

Some experts say the daughter’s disclosing at a missile test site showed that Kim was emboldened by his advancing nuclear arsenal, the backbone of his family's rule. Others speculate if Kim continues to bring her to major public events, that could suggest that Kim might have her as his early heir apparent in his mind.