In a first, Singapore zoo has welcomed a lion cub to its animal kingdom following artificial insemination, zoo officials said on January 26.

In a first, Singapore zoo has welcomed a lion cub to its animal kingdom following artificial insemination, zoo officials said on January 26. Fondly named Simba, the cub was conceived from the semen of an old African lion named Mufasa. Both son and father were purposefully given their respective name to draw a parallel between them and Disney characters.

Describing the cub, zoo officials quipped that Simba was both "healthy and inquisitive". However, his father Mufasa, due to his old age and ill-health could not survive the procedure and passed away. According to the zoo, the little one who was born in October last year was now in the care of his mother Kayla and zookeepers.

A video of the whole process as well as the Simba’s playful activities has been shared on Facebook by the wildlife reserves Singapore. In the video, little Simba is seen drinking milk from bottle, playing with a ball amongst other things. The clip has also struck chords with netizens who have taken the opportunity to shower their blessings for the health and happiness of the 3-month-old lion cub.

Commenting on the post, a user wrote, "Hope there will be some sort of celebration  it's such a huge feat, congrats!". Meanwhile, another concerned user-added, "Did they just milk Mufasa without his consent and impregnated the lioness, I bet she didn't consent since she has to be sedated". Meanwhile, another questioned, "We are coming on Sunday! Is there any way to see young Simba? Kids will be super excited to see a lion cub!".

Read: Cast Of 'The Lion King' 2019 : Who Voices Which Animal In The Disney Film? 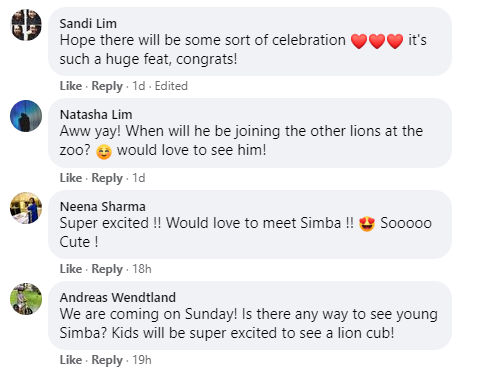 With only 23,000-39,000 mature individuals estimated to remain in the wild and with three-quarters of populations in decline, the African lion is currently classified as vulnerable by the International Union for Conservation of Nature (IUCN) Red List assessment.