Somalia: Skyward Plane With Over 40 People Crash Lands In Military Base, No Casualties

A Skyward plane carrying 40 passengers onboard crash-landed into a military base in Gedo region of southern Somalia early on Wednesday. All are reported safe. 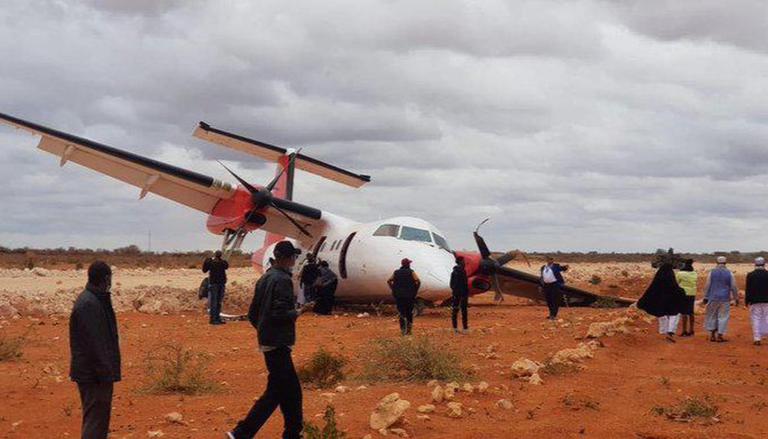 
A Skyward plane carrying 40 passengers onboard crash-landed into a military base in south Somalia early on Wednesday. The incident happened in the country's Gedo region, where the passenger flight, which took off from Nairobi, crash-landed at the Burahache military camp. Later, regional authorities said that no passengers were hurt in the aerial accident.

According to Xinhua News Agency, the plane had left Wilson Airport of Nairobi, capital of Kenya, and was destined for Mandera in northeast Kenya on Wednesday morning when the incident happened. While authorities are yet unclear on the actual reason for the emergency landing, several sources blame it on mechanical problems. However, an investigation into the crash has been initiated by the authorities.

Pictures and videos that have surfaced online show the aircraft plunged into the ground. Survivors said they sustained minor injuries after the plane landed on its landing gear within the military camp, partially damaging it.

READ | At least 7 killed in suicide bombing in Somalia's capital

Just four days ago, a Piper aircraft crashed in southwestern Germany's state, Baden-Wurttemberg while the local police have confirmed that three lives that have been lost in the mishap, the exact death toll remains unknown. The airplane was headed for Magdeburg in eastern Germany.

The light plane crashed in a wooded area of the aforementioned region near the town of Steinenbronn after taking off from Stuttgart Airport on the morning of Saturday. Media reports and DPA news agency said that the Piper aircraft crashed with three people on board. The wreckage was reported to be located about 20 minutes post taking off.

READ | 3 police reservists killed in attacks in Kenya near Somalia

Rescue and search operations are underway but workers are yet to recover airplane debris, wreckage and bodies of passengers and crew on board. So far, the flight recorder from the plane has been retrieved. The authorities are operating to determine the cause of the crash landing and the identity of the victims.