Amidst constant North Korean provocations, South Korea and the US conducted joint maritime exercises in international waters off the coast of Okinawa. 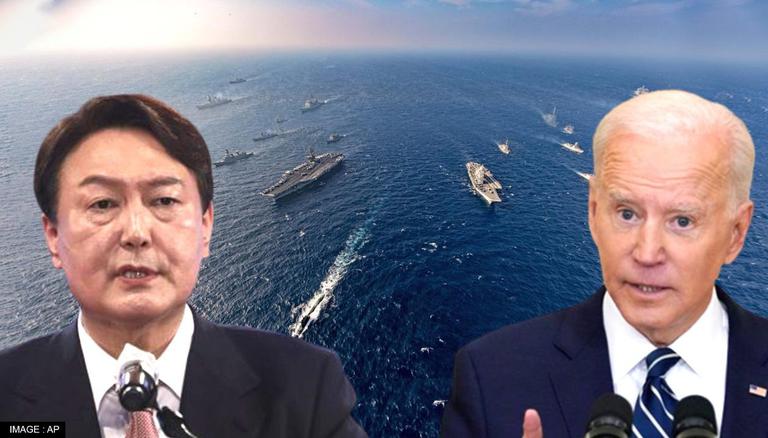 
In the midst of North Korea's escalating missile threats, South Korea and the United States conducted joint maritime exercises in international waters off the coast of Okinawa. According to South Korea's Joint Chiefs of Staff (JCS), the three-day exercise was intended to strengthen the allies' mission capabilities. The joint exercises between the two countries were kicked off on June 2 and culminated on Saturday, June 4. The 14,500-ton Marado amphibious landing ship, the 7,600-ton Sejong the Great destroyer, and the 4,400-ton Munmu the Great destroyer were among the Korean fleet's ships.

Following the exercise, the ships were on their way to Hawaii to take part in a multinational maritime exercise led by the United States that will begin in late June. The nuclear-powered aircraft carrier USS Ronald Reagan, the cruiser USS Antietam, the Aegis-equipped USS Benfold, and the replenishment tanker USNS Big Horn were also mobilized by the US Navy during the drill. In addition, the allies conducted anti-ship, anti-submarine, logistical, and maritime interdiction operations during the joint exercises.

"Through the combined strike group exercise, South Korea and the United States have solidified the determination to respond to any provocations by North Korea sternly," the JCS said in a statement, Yonhap news agency reported. According to the JCS, the drill also underlined the US commitment to providing "extended deterrence" to South Korea. It also alluded to Washington's determination to defend its ally with the full spectrum of its military weapons. The Navies of both countries also mobilised a number of significant assets for the Ship Anti-Submarine Warfare Readiness and Evaluation Measurement (SHAREM) exercise, including the guided-missile destroyer USS Sampson.

It is significant to mention here that South Korea is an important strategic and economic partner for the United States in Asia. It is the 1953 Mutual Defense Treaty between the US and South Korea that allows Washington to assist Seoul in its defence. Meanwhile, under the US "nuclear umbrella, nearly 30,000 US troops are stationed in South Korea. Furthermore, the Korea-US Free Trade Agreement (KORUS FTA) unites the economies of the two countries. Notably, South Korea is the US' seventh-largest trading partner, whereas, the US is the second-largest commercial partner of South Korea.