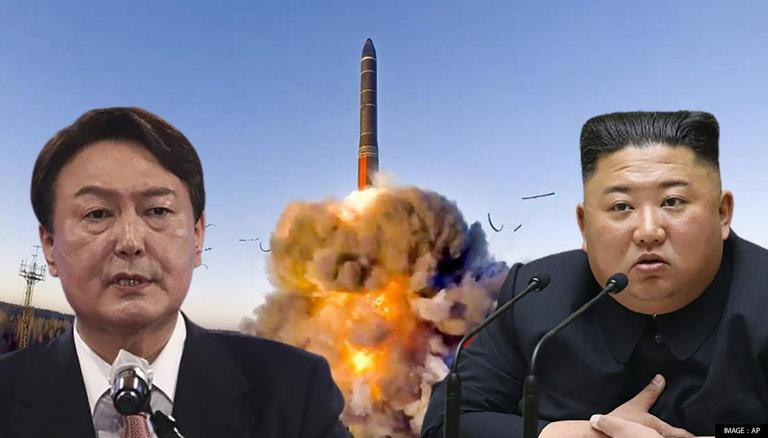 Yoon Suk Yeol made the offer during a speech at his inauguration ceremony in Seoul on Tuesday.

Yoon says the door to dialogue will be open to resolve North Korean nuclear threats. He says his government will be ready to work with the international community to present “an audacious plan” that will significantly strengthen North Korea's economy and improve its citizens' livelihoods.

Yoon, who has previously vowed a tougher stance on North Korea, appears to have avoided tough words amid concerns North Korea is preparing for a nuclear test. But it was unclear if North Korea would accept his overture as the North has previously rejected similar offers to provide incentives linked to progress in its denuclearization.

Conservative Yoon Suk Yeol took office as South Korea's president on Tuesday, facing a tougher mix of foreign policy and domestic challenges than other recent South Korean leaders encountered at the start of their presidencies.

The former top prosecutor began his five-year term at midnight Monday by taking command of South Korea's 555,000-member military and receiving a briefing on North Korea from his military chief at the new presidential office in central Seoul, formerly the Defense Ministry building.

Won In-Choul, the Joint Chiefs of Staff chairman, told him in a video conference that North Korea is ready to conduct a nuclear test if its leader Kim Jong Un decides to do so. Yoon then ordered military commanders to maintain a firm military readiness, saying that “the security situation on the Korean Peninsula is very grave.” Yoon is to take the oath of office and deliver his inaugural speech on Tuesday morning at a formal ceremony in Seoul.

Since winning election in March, Yoon, who advocates a more hard-line approach toward North Korea, has been denied a honeymoon period. Surveys show less than 60 per cent of respondents expect he will do well in his presidency, an unusually low figure compared to his predecessors, who mostly received about 80 per cent-90 per cent before they entered office.

His approval rating as a president-elect was 41 per cent, according to a survey by Gallup Korea released last week that put outgoing liberal President Moon Jae-in's rating at 45 per cent.

Yoon's low popularity is blamed in part on an acute divide between conservatives and liberals and on contentious policies and Cabinet picks. Some experts say Yoon, a foreign policy novice, also hasn't shown a clear vision for how to navigate the world's 10th largest economy amid challenges such as North Korea's advancing nuclear arsenal, an intensifying US-China rivalry and pandemic-hit livelihoods.

“Our foreign policy, national security and economy are all in trouble. Yoon should have presented some visions, hopes or leadership to show how he can pull the public together in these difficult times. But I don't think he has shown such things,” said Professor Chung Jin-young, a former dean of the Graduate School of Pan-Pacific International Studies at Kyung Hee University.

The US-China confrontation is posing a separate security dilemma for South Korea as it struggles to strike a balance between Washington, its chief military ally, and Beijing, its biggest trading partner.

During his campaign, Yoon accused Moon of tilting too much toward North Korea and China and away from Washington while exploiting ties with Japan, Korea's former colonial ruler, for domestic political purposes.

He has vowed to abandon Moon's appeasement policy toward North Korea, reinforce South Korea's alliance with the United States and improve ties with Japan.

Critics say Yoon's polices will create friction with North Korea and China, although he is likely to strengthen trilateral South Korea-US-Japan security cooperation.

Domestically, some of Yoon's major policies may face an impasse in parliament, which remains controlled by liberal lawmakers until general elections in 2024.

The COVID-19 crisis has battered an economy already hit by a bleak job market and growing personal debt. Yoon also inherits Moon's economic policy failures that critics say allowed home prices to skyrocket and widen what is one of the worst rich-poor gaps among developed nations.

“The challenges that Yoon has at the start of his presidency are the toughest and the most unfavourable ones” among South Korean presidents elected since the late 1980s, a period viewed as the start of the country's genuine democracy after decades of dictatorship, said Choi Jin, director of the Seoul-based Institute of Presidential Leadership.

Yoon, 61, has invited criticism - even from some of his conservative supporters - by moving his offices from the mountainside Blue House presidential palace.

Yoon said moving to the capital's center is meant to better communicate with the public, but critics question why he has made it a priority when he has so many other urgent issues to tackle.

Some of Yoon's Cabinet picks have been embroiled in allegations of ethical lapses and misdeeds. His health minister was accused of using his status as head of a university hospital to help his children enter its medical school. The nominee denies the allegation.

Yoon, a novice in domestic party politics as well as foreign policy, was prosecutor-general for Moon before he resigned and joined the main conservative opposition party last year following internal feuding with Moon's political allies.

Choi said Yoon has not yet established his own solid power base within the conservative camp, one of the reasons he suffers a low approval rating.

Some experts say a planned trip to Seoul next week by U.S. President Joe Biden is a good opportunity for Yoon to promote public confidence in his leadership, if the two leaders agree on steps that enhance South Korea's national security and economy.

Prospects for the early part of Yoon's presidency could also hinge on June 1 mayoral and gubernatorial elections. If the liberals win more local government posts while continuing to hold a majority in parliament, “things will be really difficult for Yoon,” Choi said.(AP) RUP