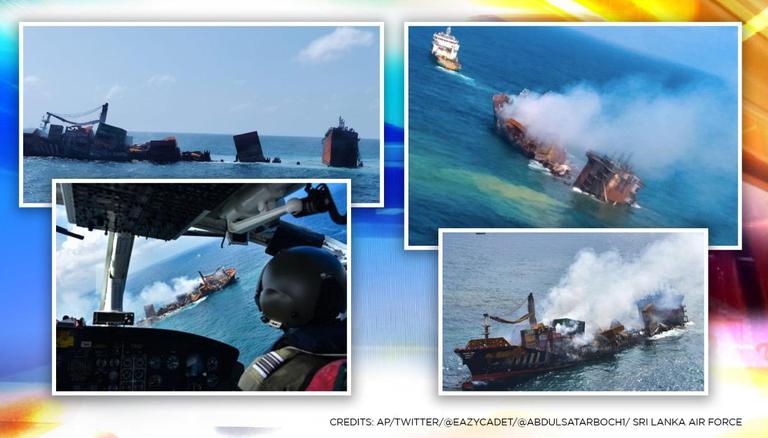 
The fire struck Singapore-registered MV X-Press Pearl, carrying tons of plastic, chemicals, and oil has sunk off the coast in Sri Lanka, sparking fears of the worst environmental disaster. Authorities on June 3 scrambled to lead a response on the aftermath of the worst possible maritime disaster that will likely occur at Sri Lanka’s main port. MV X-Press Pearl was laden with over 1,486 containers that consisted of 25 tonnes of nitric acid, among other chemicals, which was loaded at the port of Hazira, India, on May 15.

Situation Update: Latest videos of the "X-PRESS PEARL" vessel. Footage was captured by the SLAF Bell 212 a short while ago (02 June 2021).#MVXPressPearl pic.twitter.com/4GznxCTuXy

The southeast Asian nation’s government announced that the vessel that burnt for nearly two weeks and poses oil spill hazard risks on the fishing and oceanic ecosystem. It engulfed the coastline in tons of plastic pellets, and debris,  prompting the Sri Lankan administration to ban fishing 50 miles along the coastline. Millions of bead-like bits of plastic washed ashore on the Pamunugama beach, north of the capital, in Colombo which is located in the complete opposite direction where the burning X-Press Pearl was anchored.

Sri Lankan State Minister of Fisheries, Kanchana Wijesekera said on Twitter that Sri Lanka’s Marine Environment Protection Authority planned to install the booms around the ship, and skimmers and dispersant spray would be used to tackle any oil spill from the hull. Officials had launched a criminal investigation against the vessel’s crew for carrying 25 tonnes of nitric acid on the ship before it entered the Colombo harbour. The 25-member crew of Russian, Chinese, Philippine, and Indian nationals, all of whom rescued by the Sri Lanka Navy on 25 May, are under investigation.

“As the flag State, the Maritime and Port Authority of Singapore (MPA) has been in constant communication with the Sri Lankan authorities, ship operator, and classification society on efforts to stabilize the ship put out the fire, and put in place measures to reduce the extent of  environmental impact,"  Flag-state owner Singapore said on twitter. 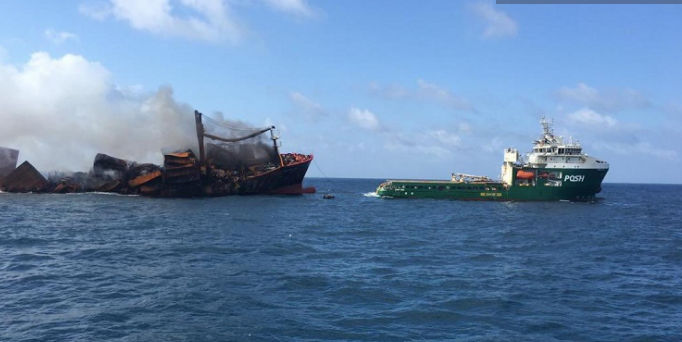 The Sri Lankan Navy is now afoot preparing immediately to tackle the oil spill after the ship sank on Thursday. X-Press Feeders, operators, and the Salvagers along with Indian Navy cooperation’s have been dousing the massive blaze. The experts were trying to attach a tow line to prevent the vessel from sinking but the "efforts to move the ship to deeper waters have failed” Thursday.

"The ship's aft portion is now touching bottom at a depth of 21 meters (70ft)," while the forward area remains afloat with smoke coming out of two cargo holds,” the ship’s manufacturing company said in a statement.

Soldiers had earlier launched a rigorous initiative to clean the debris, plastic pollution spread vastly by the then fuming Singapore flagged cargo outside the Colombo harbour [at 9.5 nautical miles 18 km northwest]. The ship  spilled chemical granules used to manufacture plastic on the beach in Ja-Ela, which also washed on the beaches of Wattala to Negombo in the island nation’s suburbs. The scrap from the 186-meter (610-foot) burning vessel floated around, some of which also polluted the Indian Ocean.

X-Press Pearl vessel was on fire since 11 days

In the visuals that emerged, Sri Lankan soldiers were seen attired in Protective hazmat suits toiling to rapidly clean the plastic laden beaches, accumulating granules into sacks for safe disposal. Bulldozers scooped tonnes of the polythene pellets generally used in the packaging industry. X-Press Pearl vessel had been on fire for the past 11 days. There were looming fears of a major environmental disaster already if the ship, which was at the time too hot to get onboard, sank.