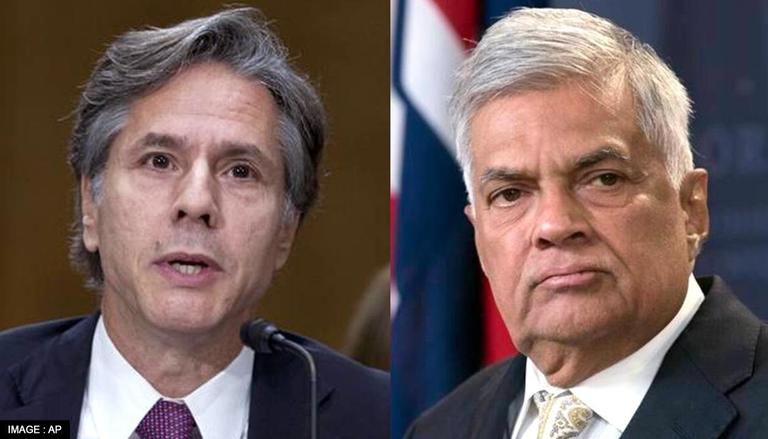 
As Sri Lanka continues to face economic turbulence, the worst ever since the country became independent in 1948, newly-appointed Prime Minister Ranil Wickremesinghe dialled the US Secretary of State Antony Blinken on Monday and briefed him about the country's grim situation. During the conversation, Sri Lankan PM explained the current status of the ongoing discussions with the International Monetary Fund (IMF). According to the statement released by Prime Minister’s media unit, Wickremesinghe said he is looking to work closely with the United States and further strengthen ties between the two nations.

Responding to Wickremesinghe's demand, the US secretary agreed to support the country and assured him of promoting investment in Sri Lanka after the conclusion of the IMF talks. "It was a pleasure speaking to Secretary of State @SecBlinken today. I briefed him on the current economic situation and requested for our countries to work closer. He assured his support to further promote US investments in Sri Lanka upon the completion of IMF negotiations," the island nation's PM wrote on Twitter.

Meanwhile, spokesman for the United States Department of State, Ned Price said that Blinken affirmed the United States’ commitment to the Sri Lankan people during this challenging time. Also, he said that the US secretary underscored the importance of supporting reforms that address the concerns of all Sri Lankans, including democratic governance and human rights.

Good call today with new Sri Lankan Prime Minister @RW_UNP Wickremesinghe. During these economically and politically challenging times, the U.S. stands ready to work with Sri Lanka, in close coordination with the International Monetary Fund and the international community.

The island nation has been experiencing its worst economic crisis in history. The country has huge debt obligations and dwindling foreign reserves, and has been struggling to pay for imports, causing a shortage of essentials. Citizens were forced to stand in long queues for fuel, cooking gas, and medicines. Earlier in May, the World Bank said it will disburse nearly $700 million to the island nation in the next few months. The major development came after the World Bank's Country Manager in Colombo, Chiyo Kanda held discussions with the Sri Lankan Minister of Foreign Affairs GL Peiris on the current situation of the country last month. During the most awaited meeting, Kanda assured him that the agency will work with the Asian Development Bank (ADB), Asian Infrastructure Investment Bank (AIIB) and the UN office to re-purpose their already committed projects.

PM Ranil accuses the earlier government of the current situation

Meanwhile, on several occasions, the Sri Lankan PM blamed the earlier government for the food crisis in the country. According to him, the Mahinda Rajapaksa-led government had abruptly implemented a 100% organic agriculture model by banning chemical fertilisers. He said this resulted in the collapse of the agriculture sector. Moreover, he claimed that foreign exchange shortages caused by a fall in tourism during the COVID-19 pandemic were also a major reason for the current situation. However, this time, securing fertiliser and compiling a food security program were being given equal priority, he maintained.