During this underwater operation, diving team inspected if there's leakage from the fuel tanks in the submerged part of the MV X-Press Pearl, Sri Lanka said. 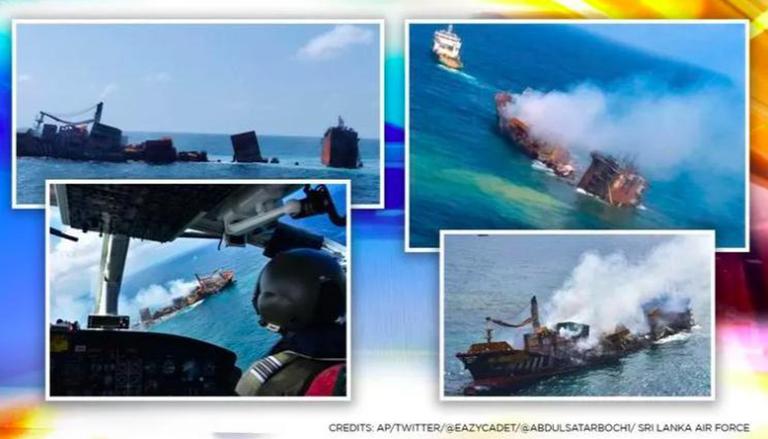 
Marine experts from the Merchant Shipping Secretariat with the assistance of the Sri Lanka Navy recovered the Voyage Data Recorder, or VDR commonly known as the “Ship’s Black Box” from the fire-stricken sunken ship MV X-Press Pearl which was laden with tons of chemicals, plastic material, and 25 tonnes of nitric acid, Sri Lanka Ports Authority officials said. The Singapore-flagged was caught ablaze for 12 days and was mostly destroyed in the fire.

All crew members were safely evacuated from the ship. After the efforts to tow the MV X-Press Pearl into deeper waters failed, the stern of the vessel submerged and rested on the seabed at some distance away at the outer harbour of Port of Colombo.

On June 6, the Sri Lanka Ports Authority announced that Sri Lankan Navy recovered the ship’s voyage data recorder also known as the black box. VDR is an instrument safely installed on a ship to continuously record vital information related to the operation of a vessel. VDR data on a ship can be used as vital information during an accident investigation.

A team comprising several senior diving officers of the Sri Lanka Navy, conducted a 'special diving operation' to inspect any fuel leakage from the fire-damaged ship. Deep-sea divers conducted an initial inspection to assess the condition of the hull. No signs of oil or chemical spills have detected so far, Sri Lanka's Ports Authority said.

During this underwater operation, the diving team inspected if there is any leakage from the fuel tanks in the submerged part of the MV X-PRESS PEARL. The diving team carried out this operation in unforgiving weather, as rough sea conditions, poor underwater visibility, and strong currents in the sea area were in existence right through. Meanwhile, the Navy has made arrangements to conduct another diving operation tomorrow as well, in order to inspect the underwater profile and investigate whether there is a fuel leakage from the ship into the sea—Sri Lanka's navy said in a statement.

Sri Lanka's Ports authority revealed that the VDR will be thoroughly investigated to find information related to the operation of the vessel as well as the last verbal exchanges between the captain of the vessel and the crew. The data would be handed over to local law enforcement agencies investigating the cause of the fire as a legal probe is underway. The ship’s operator, meanwhile on Sunday said that the vessel's aft portion remains stuck on the seabed at a depth of about 21 meters (70 feet). Its forward section including the hull continues to settle down at a slow pace.

#srilanka_navy conducted a special diving operation at #MVXPressPearl to detect fuel leakages and no abnormality observed yet. #lka #SriLanka #Defence

#srilanka_navy engaged in a diving operation inspecting underwater profile of partially submerged #MVXPressPearl to assist salvors on 03 June. Underwater assessment could not bring about desired results due to poor visibility. pic.twitter.com/YoGq9mHGnd

MPA further understands that the Sri Lankan authorities are investigating the cause of the incident with the ship operator. As the flag State, MPA has also commenced its own investigation on the incident, Maritime and Port Authority of Singapore, where MV X-Press Pearl is registered said in a release.

Operator X-Press Feeders informed that the Salvagers are vigilant on the scene to deal with the oil spills, as it apologized for the maritime disaster. Sri Lanka’s ports authority stated that Sri Lanka's Navy, Indian coast guard, salvage crews, and local authorities were prepared to deal with any immediate chemical disaster, oil pollution, or debris, as the teams were monitoring the situation 24 hours.

According to the Sri Lankan authorities, there were about 300 tons of oil on board the ship as it started burning on May 20. Most fuel is speculated to have been consumed in the massive fire that broke out suspiciously. X-Press Pearl was carrying just under 1,500 containers, with 81 of those containers described as “dangerous” goods, according to The Associated Press, that had eye-witnessed the ship’s manifest shortly before it sank. MV X-Press Pearl was loaded at the port of Hazira, India, on May 15. As it sank on June 3, Sri Lankan authorities scrambled to lead a response on the aftermath of the worst possible maritime disaster that they feared was likely to happen at the country’s main port.

Risks on fishing and oceanic ecosystem

The southeast Asian nation’s government announced that the vessel that burnt for nearly two weeks and poses oil spill hazard risks on the fishing and oceanic ecosystem. It engulfed the coastline in tons of plastic pellets, and debris,  prompting the Sri Lankan administration to ban fishing 50 miles along the coastline. Millions of bead-like bits of plastic washed ashore on the Pamunugama beach, north of the capital, in Colombo which is located in the complete opposite direction where the burning X-Press Pearl was anchored.