More than $32,000 has been raised for a Starbucks employee in San Diego in a GoFundMe campaign after he refused to serve a customer who wasn’t wearing the protective face mask to stem the spread against coronavirus. Lenin Gutierrez, the Barrista coffee shop employee earned respect after a woman named Amber Lynn Gilles posted about him on Facebook criticising that he declined to serve coffee because she was not wearing a mask.

"Meet Lenin from Starbucks who refused to serve me cause I'm not wearing a mask. Next time I will wait for cops and bring a medical exemption," Amber wrote in a post on Facebook. While the post went viral with more than 133,000 comments and 49,000 shares before it was taken down Friday, people worldwide poured in tips and appreciation for the Starbucks employee and rebuked the Amber. 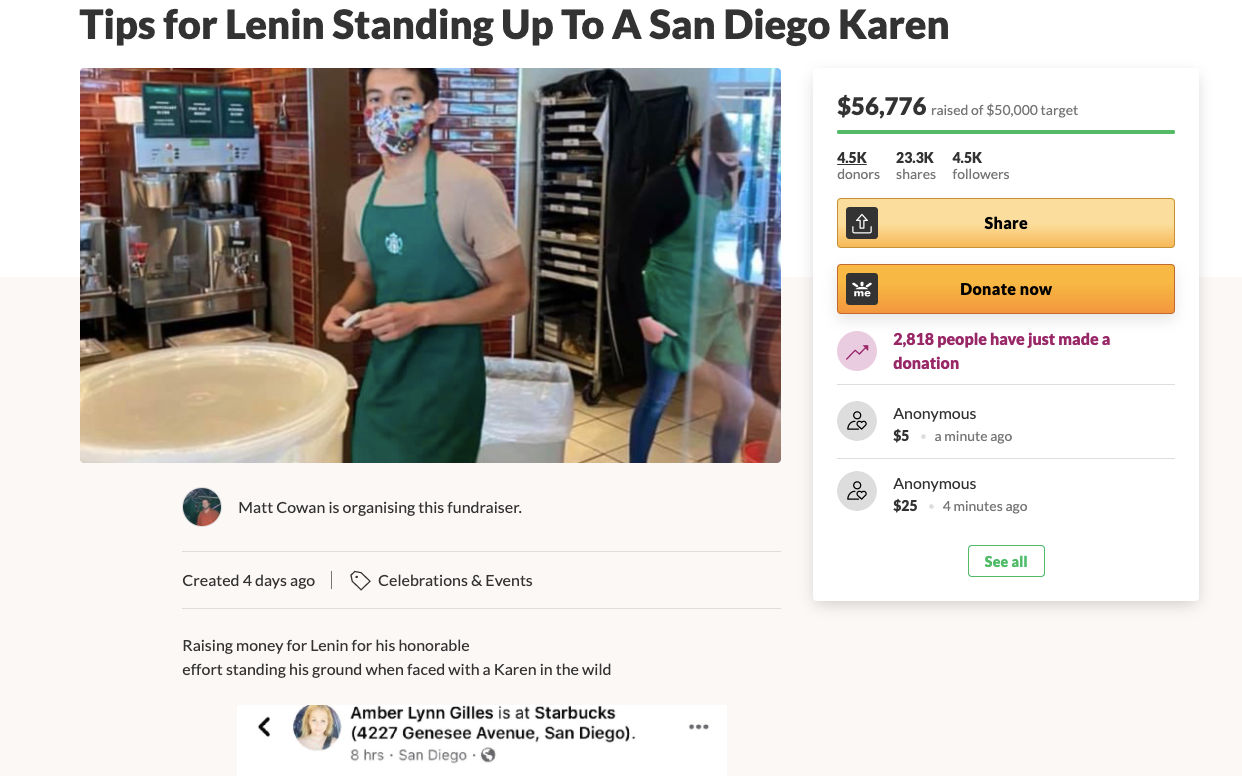 Due to the overwhelming response and a huge amount of tips that he received, Gutierrez, aged 24, posted a video response on social media and thanked everyone who donated to the GoFundMe campaign. He said that he had explained the store’s mask policy to the woman and had offered a way to still serve the customer, however, she lost her temperament and started cursing, saying, the customers were “sheep” and left in a haste.

“I was going to show her the paper showing that we’ve been requiring face masks but we can still help, but before I could say anything, she flipped me off and she said, No, I don’t need one,’” Gutierrez said. “She started cursing up a storm, she started calling people sheep and she left, and within a few minutes she came back and she asked for my name.”

At Starbucks, the mask policy was announced on June 18, to slow the spread of the coronavirus. A Starbucks spokesperson reportedly said that the company was adhering to the COVID-19 guidelines proposed by the Centers for Disease Control and local governments. Further, the woman now says that she has received death threats after publicly shaming the barista who refused her on social media. I never threatened him, I just called him out on his actions. I never threatened him and I’ve received death threats, thousands, it’s very upsetting. It’s very scary,” said Amber Lynn Gilles.

“I never threatened him.” Hear from woman who was denied service at a Clairemont Starbucks for refusing to wear a mask. She publically shamed the barista. A Go Fund Me Page on his behalf is now over $22,000. She says she’s getting death threats. #nbc7 & https://t.co/ylvk5rP6Vf pic.twitter.com/gCREw0LR5V