In the video posted on Twitter, the Talibani fighters were seen snatching papers from Afghan women protestors demanding equal rights in Kabul. 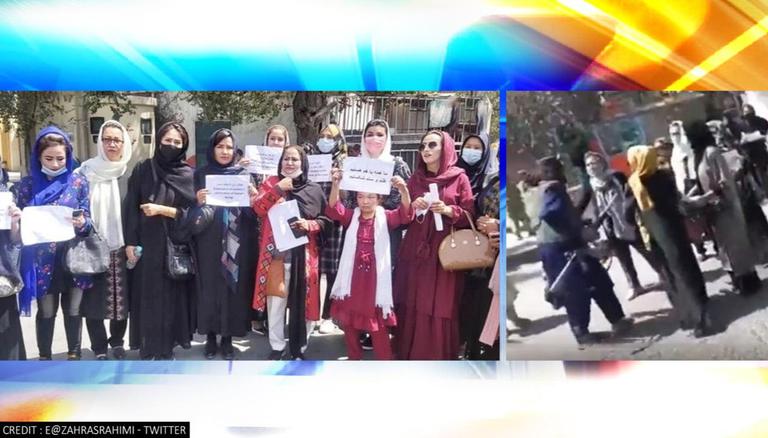 
In a key development, Women in Kabul, taking a leaf out of the recent turn of events elsewhere in Afghanistan, took to the streets on Friday, demanding equal rights and opportunities, inclusion in work, and education under the new government. The terrorist group is set to announce its formal government in the war-ravaged country soon. However, a video shared by TOLO news journalist Zahra Rahimi shows armed militants restricting the protestors and attacking women and girls who demonstrated on the Kabul streets. In the video posted on Twitter, the Talibani fighters were seen snatching papers from Afghan women protestors demanding equal rights.

They also heckled a person those filming the demonstration and attempted to hit women with rifle butts as they protested. Taliban's brutality and the truth about trampling women’s rights were on display during the protest.

Following yesterday’s protest in Herat, today, women in Kabul come to streets and asking for their rights. pic.twitter.com/GBs6pIbc88

The video shows that Taliban armed fighters are beating protesters women and girls who ask for their rights. pic.twitter.com/QmBwikESEg

Taliban have banned many women from working outside and girls from attending schools or universities. Women have been asked to stay indoors until the fighters 'learn how to deal with them.' On Thursday, A group of Afghan women led a similar demonstration in the western city of Herat. The protesters in Herat included women’s rights activists, university students, and government employees.

The protesters held banners with slogans calling to preserve the country's achievements of the past two decades and for the participation of women in the next government. They also advocated women’s right to work and to get an education. Holding signs such as "No government is sustainable without women’s support", they marched towards the governor's office.

Following the collapse of the former government, the Taliban banned several female presenters working at RTA (the national radio and television facility in Afghanistan). So far, the group has only asked female healthcare workers to return to work.

Taliban to announce government on Friday

The Taliban is likely to announce the new government within hours as the country is battling severe drought and humanitarian crisis. As per reports, a ceremony will take place at the presidential palace in Kabul.

Sources suggest that the new government will be led by Taliban commander Mullah Abdul Ghani Baradar. The group's founder Mullah Mohammad Omar's son Mullah Yayub is also likely to get a senior position. Some reports also suggest that Mullah Hibatullah Akhundzada, a religious leader, will lead the new regime.