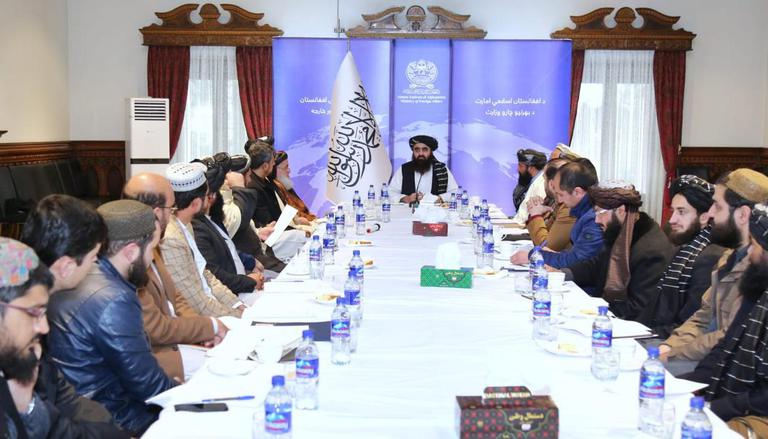 
A Taliban delegation from Kabul, led by acting Foreign Minister Amir Khan Muttaqi, reached Tehran on Saturday to meet with Iranian officials. The visit by the 26-member team is aimed at discussing political, economic, transit and refugees issues between Afghanistan and Iran, Taliban Foreign Ministry spokesperson Abdul Qahar Balkhi said in a Twitter post. "A preliminary meeting for the visiting delegation was held in Storai Palace, MoFA, where significant issues were assessed and included in the agenda," he further informed.

At the invitation of Iran, a senior delegation led by the Foreign Minister Mawlawi Amir Khan Muttaqi left for Iran today. pic.twitter.com/hroHIlbZfO

The visit aims at discussions on political, economic, transit and refugees issues between Afghanistan and Iran. A preliminary meeting for the visiting delegation was held in Storai Palace, MoFA, where significant issues were assessed and included in the agenda.

Speaking to reporters on Saturday, Muttaqi expressed his wish to form agreements with Iran on trade, economic and political issues. "We hope to have a fruitful visit," ANI reported, quoting the Taliban FM. On the other hand, the Taliban Minister for Industry and Commerce Nooruddin Azizi, who is also a part of the delegation, stated that Afghanistan will hold talks with Iran to secure a "large deal" on importing gas and fuel from Tehran. This comes as a part of the deals to be drawn under the supervision of the joint committee formed between Iran and Afghanistan last November in order to develop Kabul's economic condition, ANI reported.

READ | Afghanistan: Taliban directs its ranks to not infringe on privacy of citizens

"We will work to sign big contracts on fuel so our private sector can buy an import goods to meet the demand in the market and decrease the prices," Azizi said, as quoted by TOLO News.

It is pertinent to mention that the said trip is the first-of-its-kind since the Taliban overtook Kabul in mid-August after the hasty withdrawal of the US-led forces and collapse of the Western-backed government. However, Iran has not yet recognised the Taliban government and fears a new influx of refugees, Radio Free Asia (RFA) reported. Earlier, Iranian President Ebrahim Raisi had said that Tehran supports the formation of an all-inclusive government in Afghanistan. Meanwhile, Tehran is already hosting millions of Afghan refugees since the mass evacuation ended in August.

As per an RFA report, Afghan refugees in Iran are facing humanitarian hardships and struggling to survive. The stranded refugees are grappling with hunger, abuse and fear of deportation. As per Iranian authorities, at least 1.2 million Afghan refugees are currently living illegally in Iran. In September, Iran announced that it will stop welcoming Afghan refugees. Following this, there have been reports of unofficial detentions, mass deportations and human rights violations. The latest data from International Organisation for Migration (IOM) suggested that Iran currently expels about 3,000 Afghans per day.