Hitting out at Jagmeet Singh, Fatah has accused the NDP leader of attempts to please the Muslim vote bank by 'exaggerating' the xenophobia that Muslims face 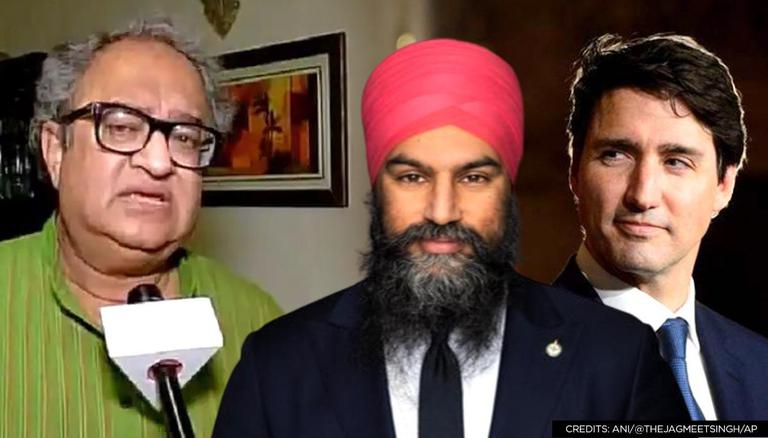 
In an unsparing response to Canada MP Jagmeet Singh claiming rise of Islamophobia following the horrific killing of an entire Muslim family in Canada, renowned journalist and author Tarek Fatah countered the politics of the NDP leader by arguing that Canada was the 'safest country' for Muslims, even when compared to Islamic countries like Pakistan and Turkey. Hitting out at Canadian MP Jagmeet Singh, Fatah has accused the NDP leader of attempts to please the Muslim vote bank by 'exaggerating' the xenophobia that Muslims face.

Writing a column for Canada's Toronto Sun, Tarek Fatah - born in Pakistan and a Canadian now- posed hard questions for Jagmeet Singh followed by a point-by-point fact-check for the NDP leader, thereby bringing to fore Singh's hypocrisy in turning a blind eye to the atrocities faced by Muslims in countries even where they account for the majority of the population.

"Let me assure you Mr. Singh, both as a New Democrat and as a Muslim, it is only in Canada that I feel safe as a Muslim. Not in your imaginary Khalistan or in Iran, Turkey, or Pakistan that fuels much of the terrorism and hate around the world out of their consulates and embassies in Europe and North America," Fatah wrote in his scathing response to Jagmeet Singh's politicism over Islamophobia in Canada.

Pointing out at Jagmeet Singh's silence over the atrocities faced by Ahmadiyya Muslims at the hands of Pakistani authorities, Iranian exiles and Muslims in Balochistan, Fatah questioned who had given the NDP leader the 'right' to speak on behalf of Canada's Muslims. In his column, Fatah also brought to attention that it was him and other Muslims that, in a progressive move, campaigned against the introduction of conservative Islamic Sharia Law into Canada's Family Court system and yet they were labelled 'Islamophobic'.

In his column, Tarek Fatah schooled Jagmeet Singh over the definition of 'Islamophobic', which according to the Canadian author, was a slur against 'Muslims who reject religion as a source of public law and who moved to Canada to flee theocracies such as Iran, Pakistan, Somalia.' Presenting the other side of the argument, Fatah also brought to fore the genocide in Bangladesh that was committed by 'Muslim Pakistan' and the attempt to erase Black Muslims from Darfur was the work of Muslim Sudanese Arabs.

"Islamists among us–those who wish to implement the radical Muslim Brotherhood agenda in North America and Europe–love to invoke the term Islamophobia since they know this protects them and their medieval right-wing ideology being challenged by the rest of Muslims," he added.

Muslims not safe in Canada?

Politicians such as @theJagmeetSingh are empowering Islamists by spinning the 'Islamophobia' narrative into the London massacre. https://t.co/awVNWwsAFx

Canada's Jagmeet Singh echoed Pakistan Prime Minister Imran Khan's rhetoric as the PTI leader while condemning the killing of Muslims in Canada preached, "Islamophobia needs to be countered holistically by the international community.'

Saddened to learn of the killing of a Muslim Pakistani-origin Canadian family in London, Ontario. This condemnable act of terrorism reveals the growing Islamophobia in Western countries. Islamophonia needs to be countered holistically by the international community.

According to the Associated Press, two parents, two children and a grandmother were on an evening walk when the truck struck them at an intersection in London, Ontario. The Canadian police said that the family were targeted because of their religion. They also informed that a 20-year-old suspect, Nathaniel Veltman, was arrested in the parking lot of a nearby mall and is now facing four counts of first-degree murder.

The victims spanned three generations of a family and ranged in age from 15 to 74. A 9-year-old boy who survived remains hospitalized with non-life-threatening injuries. The victims' extended family issued a statement identifying the dead as Salman Afzal, 46; his wife Madiha, 44; their daughter Yumna, 15; and a 74-year-old grandmother whose name was withheld. Friends said they immigrated to Canada 14 years ago and they worked extremely hard in their fields and excelled.