Terrifying VIDEO: Florida Woman Rescues A Snake Stuck In A Beer Can With Her Bare Hands

Taking the Internet by storm, Rosa is seen in the video helping the reptile get its way out of the beer can, merely with her bare hands along with the help of a branch of a tree and her two little helpers, her terriers.

Spotting a snake is as scary as it can get but rescuing one is a far more challenging, is what Rosa Fond, a young woman from Florida, proved as she went on to help a snake whose head was stuck in a can.

Taking the Internet by storm, Rosa is seen in the video helping the reptile get its way out of the beer can, merely with her bare hands along with the help of a branch of a tree and her two little helpers, her terriers.

As she proceeds to save the snake, Rosa is found saying, “I gotta save a snake! Oh God, I don’t know how I’m going to do this!” nervously.

Initially, Fond is seen fidgeting with the aluminium seal, not-to-mention very close to the creature’s head, trying to pull it out by breaking the seal.

“Please don’t bite me when you get out,” she is heard saying.

However, in her attempt to free the reptile by doing so, it gets agitated, wrapping itself around her hand.

Rosa appears suitably terrified but she does not give up and further moves on to using a branch of a tree to save the snake.

After some hard work and rigour, she finally succeeds at helping it out of the can.

Rosa shared the 4.39-minute rescue clip on her Facebook wondering how she managed to get the courage for doing so.

“🐍 Ok.. this was the one rescue that I was never EVER expecting!!😂😂 I even had 2 little helpers by me😂 This snake got herself stuck inside a beer can! How on earth did I get the courage to do this I have no IDEA! She even wrapped herself on my arm twice!😂😂 it was a battle but I saved her. All for the sake of the animals..🤦‍♀️ She was enjoying her Bud light 🍺🍻Enjoy the show as it very entertaining 😂😂😂😂😂😂😂😂 I'm still freaking out and can't believe that I touched her!! Rescuing at its finest!😂😂🐍🐍🐍🐍🐍🐍🐍🐍🐍🐍🐍🐍🐍🐍🐍🐍🐍🐍🐍 P.S I did take the can away a bit after but didn't video it. I kinda had to wait a bit for the snake to calm down😂😂😂”, she captioned the video. 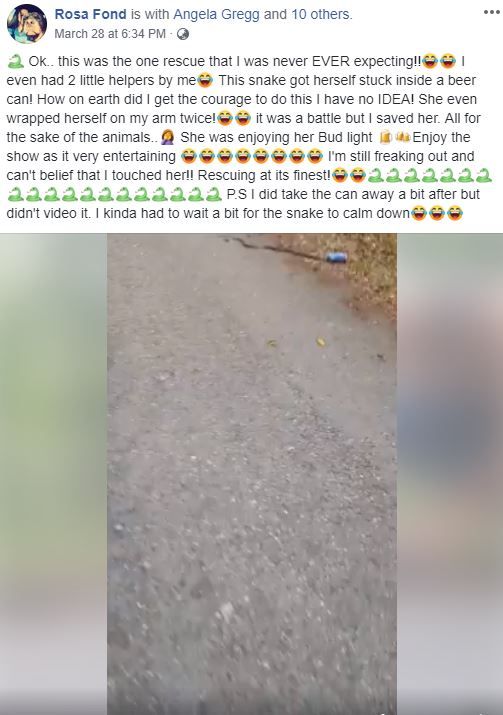 Fond is the founder of ‘Humans and Animals United’ a non-profit organization that aims at providing temporary shelter to stray, abandoned, and surrendered animals for the purpose of finding permanent suitable new homes.