Top US Official Meets Taiwan Prez Tsai Ing-wen; Thanks Her For 'standing Up' Against China 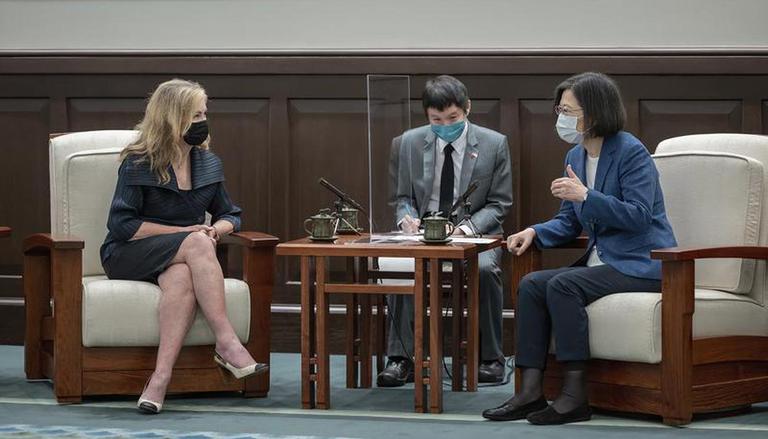 
Amid soaring tensions between the United States, Taiwan and China, US Senator Marsha Blackburn, who landed in Taipei early on Friday, met with President Tsai Ing-wen in the country's national capital, Taipei. Marsha Blackburn, a Republican from Tennessee and the senior US official who arrived in Taipei after US Speaker Nancy Pelosi's visit earlier this month, said that US President Biden's administration is looking forward to supporting Taiwan as an "independent state".

Thank you, @iingwen, for your strong leadership in standing up against the Chinese Communist Party.

The United States supports Taiwan and its freedom-loving people. pic.twitter.com/hNGADUk1ZJ

I will continue to stand with the Taiwans and their right to freedom and democracy.

Notably, Taiwan split from China during the civil war that brought Mao Zedong's Communist Party to power and established the People's Republic of China in 1949. While the Communist Party took control of the Chinese mainland in 1949, the Kuomintang-ruled government of the erstwhile Republic of China set up its government in Taiwan (officially called the Republic of China). Although the regions have been governed separately for more than seven decades, the Communist Party continues to claim sovereignty over Taiwan. Beijing has, on several occasions, stepped up military exercises around self-ruled Taiwan, which it considers its own territory under the One China policy.

Reacting to the ongoing Chinese show of aggression, President Tsai underscored that Beijing's actions show how authoritarian countries are disrupting and threatening the world order. During the meeting, both the US and Taiwanese sides stressed that economic ties between the two countries are crucial for development, especially in the semiconductor sector.

Notably, Blackburn reached Taipei late Thursday after completing her tour to the Solomon Islands and Papua New Guinea. "I just landed in Taiwan to send a message to Beijing — we will not be bullied," Blackburn said in a tweet on Friday morning.

Further, she affirmed that the Biden administration remains steadfast in preserving freedom around the globe, and added it will not tolerate "efforts to undermine our nation and our allies."

During her three-day visit, she is also scheduled to meet Taiwan's head of the National Security Council. It is crucial to note that the Chinese government warned Taiwan of a dramatic situation for allowing Pelosi to land in Taipei. It had sent 27 aircraft to Taiwan's air defence identification zone (ADIZ) hours after Pelosi's plane left the national capital. China's Foreign Ministry spokesperson Hua Chunying called Pelosi's visit "unhealthy" for "democracy" and added her visit only provoked and violated China's sovereignty and territorial integrity. However, Pelosi issued a statement describing her tour as a "strong statement that America stands with Taiwan."