Last week, authorities in the city of Mardin, Turkey, recovered gold-embroidered parchment texts written in Hebrew that are thought to be 1,000 years old. 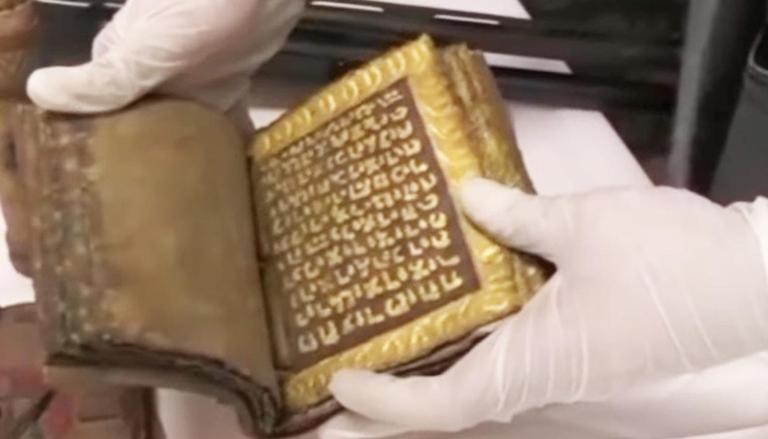 
Last week, authorities in the city of Mardin in southern Turkey recovered gold-embroidered parchment texts written in Hebrew that are thought to be around 1,000 years old after they were brought into the country illegally, as per the reports of Jerusalem Post. The Mardin Provincial Police Department shared a video of the books on Facebook, which showed drawings of animals like an owl, deer, scorpion and bull covered by Hebrew script. The four books and one scroll were identified as Torahs, which is the Hebrew Bible.

In the Facebook post, The Mardin Provincial Police Department stated that they have discovered five gold-engraved, handwritten historical works, which was unlawfully smuggled into their country, four books and one scroll are identified to be Torah. It further stated that necessary legal processes has begun against the suspects.

The Star of David was emblazoned on the volumes

The Star of David, which is the symbol of modern Jewish identity and Judaism was emblazoned on the volumes and the case in which it was kept, and one of the books featured a menorah on the cover. According to the sources of the Jerusalem Post, the scrolls recovered by Turkish officials were stolen from the Eliyahu Hanavi Synagogue in Damascus' Jobar area and smuggled to Turkey by the al-Rahman Legion, a Syrian rebel group. Locals in the Jobar area had reportedly asked that the al-Rahman Legion return the manuscripts, as well as other manuscripts that the militia had seized. The group denies owning any of the documents.

On Friday, Turkish security authorities in northern Samsun province confiscated a 2,000-2,500-year-old Torah with a golden inscription, according to Jerusalem Post. The sources who don’t want to be recognised said that police stopped two suspicious cars after receiving a tip and discovered the manuscript.

When the police seized the books, it was wrapped in a plastic bag and stuffed into the pockets of an almost empty canvas bag. According to Jerusalem Post, the golden Torah was removed from the plastic bag by police with gloved hands, before being removed from its antique protective shell. Five people have been apprehended.