"I believe that in addition to the Normandy format there should be a direct conversation with the President of Russian Federation Putin,”Ukrainian leader said. 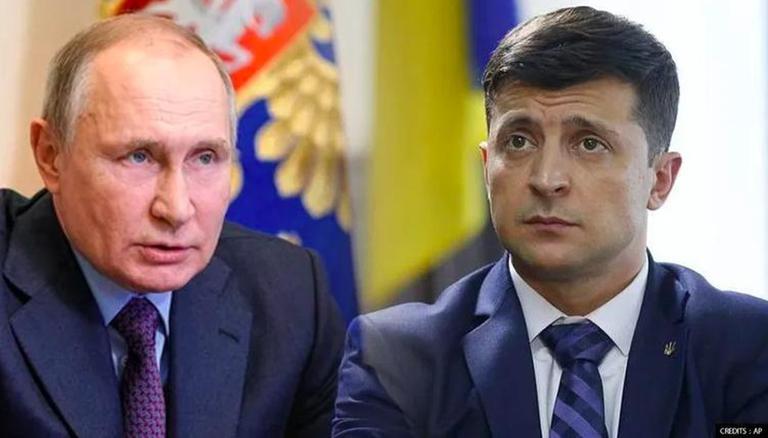 
Ukrainian President Volodymyr Zelensky on Thursday said that meeting and holding a dialogue with the Russian President Vladimir Putin would end the seven-year conflict in Donbas, Eastern Ukraine, the Ukrainian president's press service reported. "I believe that in addition to the Normandy format (Ukraine, Russia, France, and Germany), there should be a direct conversation with the President of the Russian Federation,” the Ukrainian leader said at a presser. He added, “I also see a format for involving the United States’ President Joe Biden in this discussion.” Zelensky reiterated that he wanted to end hostilities on the Ukrainian border and as of now, the de-occupation of Ukrainian territories remains his priority as it may become the subject of an all-Ukrainian referendum.

Earlier last month, the Ukrainian President held a conversation with French President Emmanuel Macron and German Chancellor Angela Merkel to ease tensions with Moscow amid the military build-up. “The issue of the security situation in eastern Ukraine and the de-occupation of our territories needs to involve leaders of Russia, France, and Germany", Zelensky said as he held a video conference with Merkel during the meeting with Macron. Meanwhile, the French President told a news conference, “All our work is aimed at avoiding an escalation and defusing tensions at Moscow Ukrainian border.” The so-called "Normandy" format talks between France, Germany, Ukraine, and Russia, have been stalled since 2019 as the conflict in eastern Ukraine and annexed Crimea spiked with Moscow’s “provocative" military build-up.

"Does Ukraine want the war? No. But is Ukraine ready for the war? Yes," Ukrainian leader Volodymyr Zelensky had said last month adding that his country wants to settle tensions and end the conflict with Moscow through diplomacy.

Putin welcomed his Ukrainian counterpart 'at any time convenient'

As Russia, last month, diffused tensions after Defense Minister Sergei Shoigu ordered 150,000 armed personnel to withdraw and return to their permanent bases by May 1, Ukraine’s president said that his country “welcomes any steps to decrease the military presence and deescalate the situation in Donbas.” Russian military pull-out came in the aftermath of several military drills, and partial violations of ceasefire at the 1,200-mile border near the annexed Crimea. However, Shoigu asked Russian soldiers to leave behind some weapons and armoured vehicles and withdraw from the region. The Ukrainian President had then said in footage said that he was willing to meet with his Russian counterpart Vladimir Putin in the Donbas region. Putin meanwhile said that Russia was ready to host Ukrainian President Volodymyr Zelenskiy for talks in Moscow “at any time convenient for him.”