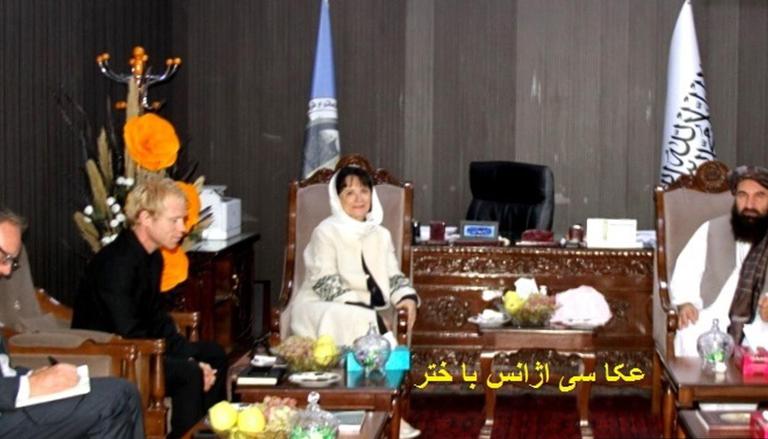 
On Tuesday, United Nations Special Representative Deborah Lyons met with Khairullah Khairkhwa, the Taliban-led Afghanistan's current Minister of Information and Culture, to discuss the country's pressing concerns. Both sides agreed on the importance of finding common ground to help Afghans achieve stability in their country. The UN Assistance Mission in Afghanistan (UNAMA) sent out a tweet stating that Deborah Lyons met with Khairullah Khairkhwa at the Ministry of Information and Culture. According to the tweet, they agreed that the Taliban and the international community must establish common ground on critical concerns to provide all possible support to Afghans and promote Afghanistan's stability and prosperity.

.@DeborahLyonsUN & Khairullah Khairkhwa met at Ministry of Info&Culture today. They agreed on need for Taliban & int’l community to find common ground on pressing issues so all possible support to Afghan people can be made available & help #Afghanistan’s stability & development pic.twitter.com/Lirfqk5wRS

Lyons met with former Afghan President Hamid Karzai last month to discuss the country's current predicament. The UN ambassador emphasised the importance of providing humanitarian relief to the Afghan people. After a strong and swift offence against Afghan government forces, the Taliban conquered Kabul more than a month ago. Last month, the country was thrown into chaos when the Taliban took control of Kabul and the government of former President Ashraf Ghani collapsed.

Last month she stated that the international community must create a "modus vivendi" as soon as possible to allow billions of dollars in frozen donor funds to flow into Afghanistan's struggling economy. She said that the UN will have to decide how to deal with high-level members of the Taliban's de facto government, citing reports of deaths, crackdowns on women's freedoms, and other rights violations by the country's new Taliban-led administration.

According to EU foreign policy leader Josep Borrell, Afghanistan faces a severe humanitarian crisis, and a socio-economic collapse is coming, which will be disastrous for the region and world security. In a blog post, Borrell stated that Afghanistan is undergoing a catastrophic humanitarian crisis, which would be dangerous for Afghans, the region and international security. According to Borrell, there is numerous evidence that the situation in Afghanistan is deteriorating. In addition to humanitarian workers, the EU's top diplomat highlighted that the international community needs to have people on the ground in Afghanistan.