United Nations Security Council (UNSC), on Monday, adopted a resolution calling on the Taliban to allow safe passage for those seeking to leave Afghanistan. 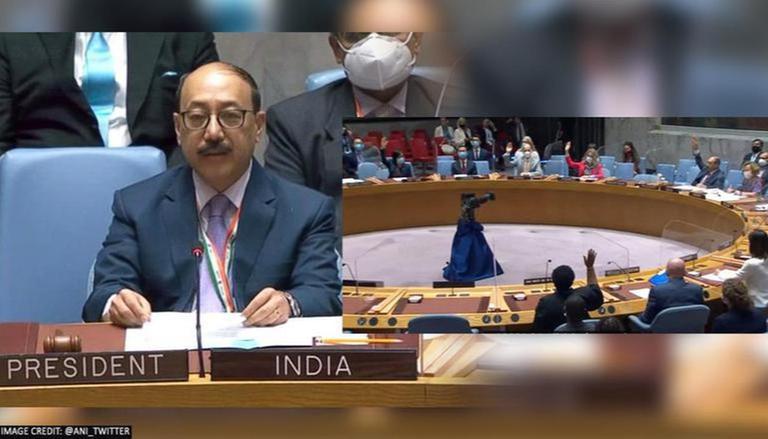 
United Nations Security Council (UNSC), on Monday, adopted a resolution calling on the Taliban to allow safe passage for those seeking to leave Afghanistan but stopped short of vowing to create a “safe zone” as proposed by France and its allies. Earlier today, August 31, the Sunni Pashtun insurgents marched triumphantly across Kabul’s Hamid Karzai Airport after the last American paratrooper left the war-ravaged state to its fate. More than 1,14,000 people have been airlifted from Kabul in the past two weeks as part of the US evacuation efforts. However, a small number of people have chosen to stay behind stressing their need to stay back with their families.

“The UN Security Council passed a resolution on Monday that calls for the Taliban to facilitate safe passage for people wanting to leave Afghanistan, allow humanitarians to access the country, and uphold human rights, including for women and children,” the global body said in an online statement.

UNSC adopts resolution on Afghanistan - 13 in favour, 0 against and 2 abstentions by Russia and China

(In the photo is Foreign Secretary Harsh Vardhan Shringla who is chairing the UNSC meet( pic.twitter.com/g1TlQYl0Fw

The resolution was passed with a vote of 13 members while two permanent members-Russia and China-abstained. It is worth mentioning that both the socialist countries have dismissed the prospect of pulling out their officials from Afghanistan, adopting the policy of non-interference. Earlier on Sunday, the US, UK and other western allies asserted that the Taliban has allowed foreign nationals and Afghan citizens with travel authorisations to leave.

With today’s resolution, the Security Council expects the Taliban to live up to its commitment to facilitate safe passage for Afghans and foreign nationals who want to leave Afghanistan today and going forward. https://t.co/iNdbwwJq53

- No safe haven for terrorists

- Safe passage for those who wish to leave

Reaffirming its commitment to the sovereignty, independence, territorial integrity, and national unity of Afghanistan, the UNSC resolution also condemned the attack at the Kabul Airport on August 26. A key aspect of the aforementioned resolution which has also been consistently highlighted by India is the demand that Afghan territory not be used to threaten or attack any country or to shelter, train terrorists, or plan or finance terrorist acts.

The resolution also calls for the strengthened efforts to provide humanitarian assistance to Afghanistan and calls on all parties to allow full, safe, and unhindered access for the United Nations. Additionally, it reaffirms the importance of upholding human rights including those of women, children and minorities, and encourages all parties to seek an inclusive, negotiated political settlement with meaningful participation of women.

READ | Netizens troll Shahid Afridi over open support for Taliban, call him 'Next PM of Pakistan'