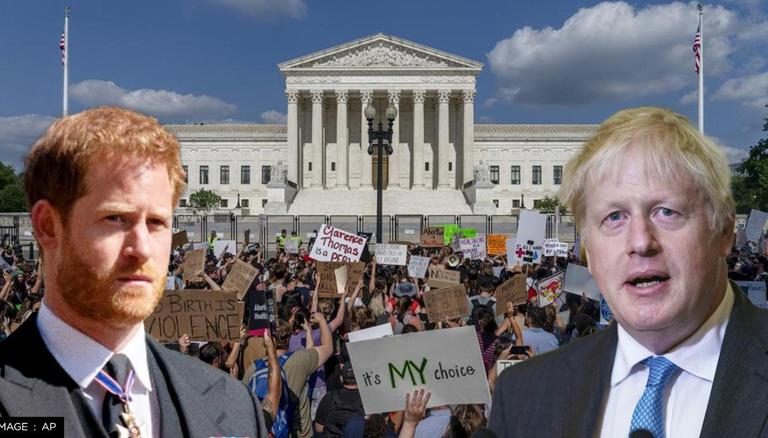 
Prince Harry, UK’s outgoing PM Boris Johnson and other prominent figures were ridiculed by US Supreme Court justice Samuel Alito for criticising the Roe V Wade ruling. After SCOTUS overturned the landmark 1973 ruling and scraped women’s constitutional right to abortion, several figures across the globe decried the move which led to several US states imposing an abortion ban.

Dismissing the criticism of the ruling by Prince Harry, Johnson, French President Emmanuel Macron and Canadian Prime Minister Justin Trudeau, Alito said “I had the honour this term of writing I think the only supreme court decision in the history of that institution that has been lambasted by a whole string of foreign leaders who felt perfectly fine commenting on American law.”

While the Conservative Supreme Court journalist made the remarks in a previously undisclosed speech on July 21, the video was posted by Notre Dame on Thursday where Alito also said, “One of these was Boris Johnson, but he paid the price” taking a dig at the UK PM's resignation. Johnson was ousted by his own Conservative Party MPs and had to let go of his leadership.

Alito made references to the abortion ruling last month which triggered nationwide protests as he delivered a speech about the importance of religious liberty. Remarkably, his remarks were met with laughter from the audience.

Alito’s remarks followed criticism of the Roe V Wade's ruling by Prince Harry, Macron, and Johnson among others. Prince Harry talked about 2022 at the UN as a “painful year in a painful decade” in his speech on 18 July. He cited the Russia-Ukraine war and “the rolling back of constitutional rights here in the United States”. UK PM Johnson had termed the ruling “a big step backwards”.

On the day of SCOTUS’ unprecedented ruling on abortion, French President Macron had said that abortion was a fundamental right. According to him, women’s freedoms were “compromised” by the supreme court. Canadian President called the US Supreme Court ruling “horrific”.