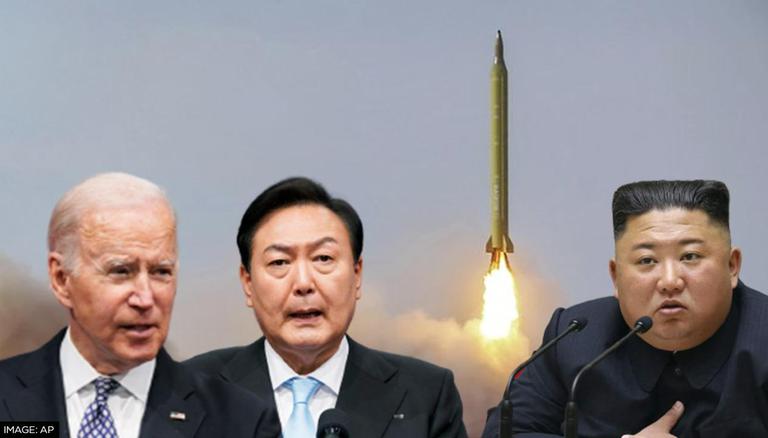 
The US and the Republic of South Korea (ROK) on Wednesday conducted joint missile drills in a firm response to North Korea's missile tests, which took place hours after US President Joe Biden concluded his Asia trip. The US Defence Department and ROK Joint Chiefs of Staff (JCS) confirmed the joint projectile tests on Wednesday. The combined missile drill came after newly appointed South Korean President Yoon Suk-yeol on Wednesday ordered "practical measures for activation of extended deterrence and strengthening of South-Korea-US combined defence posture," a statement from his office said.

The tests were a show that "we have the ability and readiness to precision-strike the origin of the provocation with overwhelming power," the ROK JCS said in a statement.

READ | EXPLAINER: Why were Japanese abducted by North Korea?

The joint military drills by the US and Seoul come after North Korea on Wednesday fired three ballistic missiles into the East Sea a.k.a the Sea of Japan. One of the projectiles was believed to be a long-range precision-guided intercontinental ballistic missile (ICBM) that has the potential to carry nuclear warheads. The Japanese Ministry of Defence also confirmed Pyongyang's test. This was the 17th missile test by North Korea in 2022 alone.

Before Biden's maiden-trip as US President to the East, both the US and ROK intelligence had reported potential risks of missile tests by Pyongyang. US National Security Advisor (NSA) Jake Sullivan during a White House briefing had said, "Genuine possibility ...of either a missile test, including long-range missile test or a nuclear test or frankly both in days leading into, on or after the (US) president's trip to the region."

According to Yonhap News Agency, Seoul detected signs that Pyongyang launched the Hwasong-17 ICBM with a detonation device in a possible sign of a nuclear test. The missiles were launched at an interval of 37 minutes and 5 minutes at 6 am (local time) in North Korea. This was the second ICBM test overseen by Kim Jong-un, who has vowed to strengthen the country's weapon power, further warning of potential nuclear war. Kim Jong-un has mostly headed all ballistic missile tests fired by Pyongyang since he ended the four-year self-imposed moratorium on long-range missile tests in March. The suspension led to a halt in talks between Washington and Pyongyang too