India & Qatar share a robust economic partnership, which is "enriched with each passing day," said VP Venkaiah Naidu at the India-Qatar Business Forum in Doha. 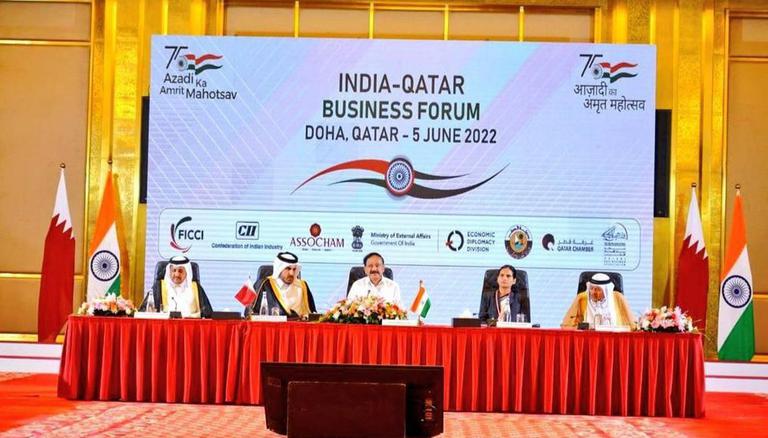 
India and Qatar share a robust economic partnership, which is strengthened with "each passing day," said Vice President Venkaiah Naidu, on Sunday, during a business community summit in the Qatari capital city of Doha. Addressing the members of the India-Qatar Business Forum, he added the "mantra" outlined by Prime Minister Narendra Modi has helped eliminate hindrances and archaic laws in order to "reform, perform, and transform" bilateral ties and investment cooperation between both nations. It is pertinent to mention that Doha is the last leg of VP Naidu's three-nation trip that began with Gabon last Monday (June 1).

"We have now a very robust India-Qatar economic partnership and it is getting enriched with each passing day. We have witnessed a steady increase in foreign direct investment from Qatar to India in recent years," VP Naidu said as per ANI.

The VP also added that the Qatar Investment Authority has flowed over investments with $2 billion in Indian companies in the past two years. He expressed confidence in the business convention, hoping it to be a platform leading to further "exchange of new ideas and creating new partnerships." He further stressed on the significance of the Joint Task Force established by the Joint Business Council and Business Chambers to mitigate investment-related difficulties and take "its work forward".

Vice President Venkaiah Naidu on Sunday launched the India-Qatar Startup Bridge- an initiative to link the new businesses in both countries. The forum is expected to offer networking, trade, and investment opportunities to the start-up ecosystem between both sides. Qatar’s FDI in India is over USD 450 million and there is great potential for increasing these investments, the MEA noted.

During the meeting, Shri Naidu launched “India-Qatar Start Up bridge” that aims to link the start-up ecosystems of the two countries. He highlighted the strength of India-Qatar ties & called for building an enabling environment and forging more collaborations for mutual benefit.