Prime Minister Narendra Modi on Tuesday, 2 November, met his Israeli counterpart, Naftali Bennett on the sidelines of the COP26 summit in Glasgow 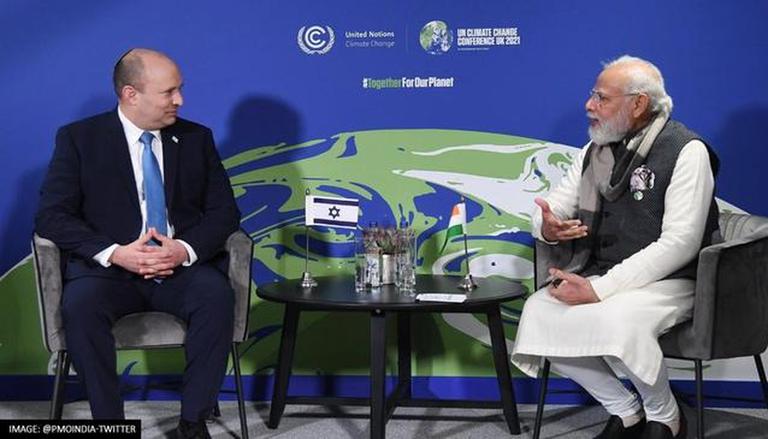 Prime Ministers @narendramodi and @naftalibennett had a fruitful meeting in Glasgow. Both leaders discussed deepening various avenues of cooperation for the benefit of our citizens. pic.twitter.com/QnzdCmgijT

In the tweet, PMO India informed that Modi and Bennett discussed "deepening various avenues of cooperation" for the benefit of the people of both countries. During the bilateral meeting, the two leaders reviewed bilateral strategic partnerships and "expressed satisfaction" over the progress made in various areas, the Ministry of External Affairs informed in the press release. Both the leaders agreed on strengthening cooperation, especially in the areas of high technology and innovation. During the meeting, Prime Minister extended the invitation to PM Bennett to visit India.

READ | PM Modi extends his wishes on the occasion of 'Dhanteras' from Glasgow, Scotland

A light-hearted moment was captured between PM Narendra Modi and his Israeli counterpart Naftali Bennett. In the video shared on the microblogging site, Israel PM told Modi, "You are the most popular man in Israel." Responding to Bennett's comment, PM Modi said "Thank you". Bennett then told Prime Minister Modi, "Come and join my party."

Israel's PM Bennett to @narendramodi: You are the most popular man in Israel. Come and join my party pic.twitter.com/0VH4jWF9dK

Earlier, PM Modi met his Israeli counterpart Naftali Bennet in their first in-person meeting since the latter took office. Taking to Twitter, Israeli PM shared a clip of two leaders engaged in conversation at the summit venue. The video was shared alongside the caption, 'It was truly great to finally meet you'. Responding to the tweet, PM Modi wrote, 'Indeed! We shall continue working together for stronger bilateral ties and a better planet. The people of India deeply value the friendship with Israel.'

We shall continue working together for stronger bilateral ties and for a better planet.

The people of India deeply value the friendship with Israel. https://t.co/PEaJ6cFxkM

PM Modi interacted with many other leaders on the second day of the 26th Conference of Parties (COP26) Summit. Prior to his meeting with the Israeli Prime Minister, Modi met with Microsoft co-founder Bill Gates in Glasgow. Furthermore, PM Modi had a meeting with President of Ukraine Volodymyr Zelensky. Modi also met Nepal Prime Minister Sher Bahadur Deuba in Glasgow. Prime Minister Modi and his British counterpart Boris Johnson on Tuesday, 2 November, launched the Infrastructure for the Resilient Island States (IRIS) initiative. It is worth mentioning Indian Prime Minister had reached Glasgow on Sunday to participate in the COP26 summit.

Prime Minister @narendramodi met @BillGates on the sidelines of the @COP26 Summit in Glasgow. Both discussed ways to further sustainable development and steps to mitigate climate change. pic.twitter.com/Li65b0VKN4

PM @narendramodi met Nepal PM @SherBDeuba in Glasgow. Theirs was a fruitful meeting, in which different issues including a collective effort against COVID-19 and working together to overcome climate change were discussed. pic.twitter.com/eusXw5C56J

PM @narendramodi had a wonderful meeting with the President of Ukraine @ZelenskyyUa. They reviewed the full range of bilateral relations agreed to strengthen cooperation in commerce, culture and other spheres. pic.twitter.com/dfeJU9160r

As you complete your successful tenure as the Prime Minister of the State of Israel, I convey my profound gratitude for your leadership and personal attention to India-Israel strategic partnership @netanyahu.

Thank you Prime Minister Narendra Modi for your great personal friendship and for the strong alliance we forged together between Israel and India.