A father performed her daughter's entire routine of cheering squad while motivating her from the spectator's bench has gone viral. Rolland Holland who went to attendant the last week's game in Yorktown, Virginia with her daughter, Mackenzi on the cheering squad. A Facebook user had posted a video showing Holland's full performance with all the right dance moves, calling him the 'Cheer dad of the Year'. Holland later said in an interview with international media that he used to watch the girls perform after every touchdown when finally one day her daughter taught him the steps. Holland also believes that the atmosphere during the game, with the band, and the excitement of college football is just another way to have fun and show support.

The video which has reached nearly four million views and more than 13 thousand comments on Facebook, the people of the internet have repeatedly said, that the 'dad should go viral' and that he is 'father-goals'. The netizens have not only appreciated Holland for his efforts to show support but also applauded his great 'dancing skills'. Some other parents were also seen relating to the father and recalled how they did similar things for their children in high school games and matches. One Facebook user, also said that Mackenzi is 'lucky to have such a supportive father'. Mackenzi also later said, that she was smiling the entire time while watching her dad perform the routine. 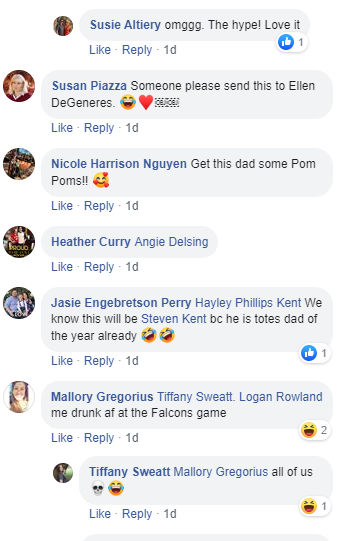 This DAD should go viral! #CheerDadOfTheYear 📣

This dad is everything! I love him and his awesome support 🙌🙌❤️

I love how no one is sitting too close to him. They know to leave him room for his kicks.