ZAO, a Chinese app that gives its users a chance to swap their countenances with celebrities, sports stars or any other person in a video cut – has gone viral

ZAO, a Chinese application that gives its users a chance to swap their countenances with celebrities, sports stars or any other person in a video cut – has gained significant traction online, securing a high number of downloads in the space of a week and just as quickly raising concerns over privacy. The application's sudden rise in fame and unexpected reaction from certain users highlighted how computerized reasoning advances or Artificial Intelligence have achieved new concerns encompassing identity verification. The application is said to raise privacy concerns over storing exceeding user data. As indicated by App Annie, a firm that tracks application downloads everywhere throughout the world, ZAO was the most-downloaded free application in China's iOS App Store as of September 1. 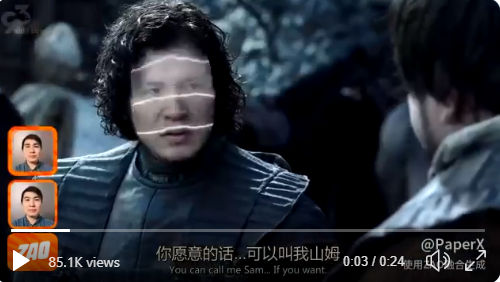 READ: Apple Apologizes For Not Living Up To Its High "User-Privacy" Ideals

ZAO was added to China's iOS App Store on Friday and promptly turned into a sensation. As indicated by a post from the application's producers on China's Twitter-like Weibo, ZAO's servers almost crashed because of too many downloads in rushhour gridlock. The application immediately became viral. Application users have to click pictures with their phones and upload them to the application. Once the face detection is done, the application swaps the face of the user with the protagonist in the video. It also offers users video recordings along with their friends and companions. The application creators have incorporated the video clips of several celebrities. Apart from the Chineses big names, other renowned faces include Leonardo DiCaprio and Marilyn Monroe.

The application became a new addiction for young users. People said they started using application after they saw their friends turning into celebrities. They too wanted to experience the glam. Gu Shi, a 21-year-old student in Shanghai, downloaded ZAO subsequent to seeing her companions post cuts on their WeChat bolsters. She told to Reuters that she had never tried any of the Japanese makeup and hairstyle applications as they seem too complicated. But this application gave her altogether with a new experience which was different from her normal life.

After the launch of ZAO, Twitter too was flooded with user reactions. Many people posted their face-swapped videos to display the features of the new application. Below is a face-swap with Big Bang Theory's Sheldon Cooper:

Chinese viral deepfakes app #ZAO Clip of myself as Sheldon generated in a few seconds from a single picture. pic.twitter.com/JI7MqWUDu6

Allan Xia, another Twitter user, shared the Asian representation of the Hollywood T.V series Game of Thrones. A Clip of displaying a conversation between John Snow and Sam. Have a look.

As the application became viral, a few application users complained that its privacy policy could jeopardize them. The user agreement in one of its sections states that the consumers who uploaded their images to ZAO also agree to submit their intellectual property rights to their face, and allow ZAO to use the same for marketing purposes. Zao said on Weibo that it would address those worries. It said that it completely comprehends the uneasiness individuals have towards security concerns. They have received all inquiries and they will address the areas they have not considered but they require some time to rectify the same. ZAO was launched by Momo, best-known as producers of a dating application that later changed into a live streaming service. The organization was listed on the New York Stock Exchange in 2014.

READ: Netizens Baffled By The Twists Of Viral Quesadilla-Pizza Recipe