Besides military training and exercise, the participating contingents in ZAPAD-2021 showcased their skills in several extra-curricular & sports activities. 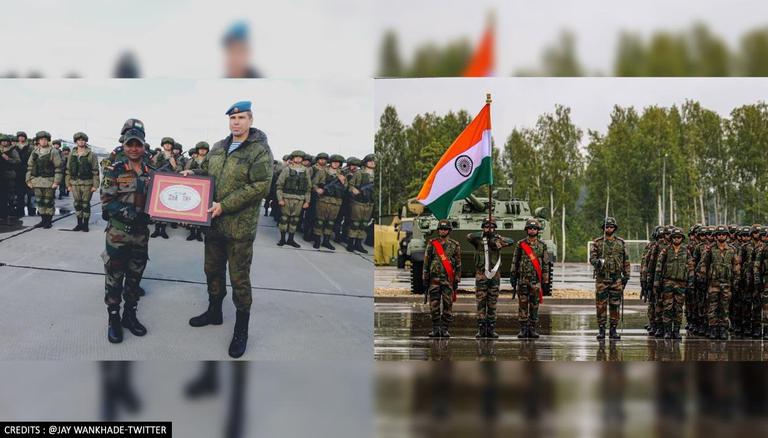 
The seven-day long ZAPAD-2021 Multilateral 'Joint Strategic Exercise' hosted by the Soviet Union and the Russian Federation came to an end today. This edition of Zapad saw participation from seven nations. ZAPAD 2021 was held at Mulino in the Novgorod Region of Russia. The Indian military, which was also among the participants in the exercise, carried out intense operations during ZAPAD 2021.

As part of the Exercise, strategic planning, tactical actions and manoeuvres were rehearsed and executed jointly in conventional operational scenarios. The Joint Strategic Exercise included defensive & offensive manoeuvres by the Coalition Forces to restore territorial integrity under simulated combat conditions. New generation weapon systems and equipment were also demonstrated by the Russian Armed Forces during the exercise.

The ZAPAD closing ceremony was chaired by the Deputy Defence Minister of the Russian Federation, Lieutenant-General Yunus-Bek Evkurov. While speaking at the ceremony LG Yunus-Bek Evkurov expressed his gratitude to all the participating contingents and observers. Among the countries participating in this exercise include Mongolia, Armenia, Kazakhstan, Tajikistan, Kyrgyzstan, Serbia, Russia, India and Belarus. The ones observing the event include China, Vietnam, Malaysia, Bangladesh, Myanmar, Uzbekistan and Srilanka will also be observing the event.

Besides military training and exercise, the participating contingents showcased their skills in several extra-curricular & sports activities including Football, Volleyball, Kettle Bell lifting, Arm Wrestling, Tug of War and the cultural program. The 2021 edition of ZAPAD has promoted synergy and inter-operability amongst the Armed Forces. It will further help in forging closer military ties between the nations. Contingent commanders present at the closing ceremony expressed immense satisfaction in the conduct of the joint exercise in terms of standards achieved and lessons learned.

The Indian Army conducted combat free falls, special heliborne operations and other mechanised manoeuvres among others when they portrayed their skills at the 'Zapad 2021' in Nizhny, Russia. The Indian Army notified via a tweet notified the intense operations carried out during the event which also saw the participation of countries with great military strength. Have a look at the tweet below by the Indian Army.

Curtains down on Exercise ZAPAD 2021. Visuals of Indian contingent at the ceremony at Nizhniy, Russia. pic.twitter.com/4nSqD5xGmV