Russian President Vladimir Putin, during the much-awaited BRICS Summit, affirmed that member countries are deepening their cooperation on the entire agenda. 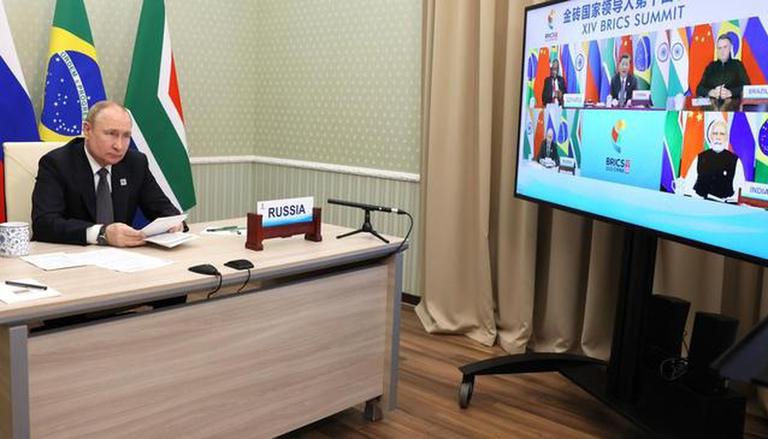 
While addressing the BRICS Summit amidst the ongoing conflict with Ukraine, Russian President Vladimir Putin affirmed that member countries are deepening their cooperation on the entire agenda and added the format has been consistently increasing its prestige and international influence. While addressing the BRICS summit virtually with the member countries-- Brazil, Russia, India, China and South Africa -- he said,

"The countries of our bloc are deepening cooperation on the entire range of issues on the global and regional agenda. And every year, the authority of the BRICS and its influence on the global stage is steadily increasing." Further, criticising the West for imposing embargoes on Russia, Putin urged the members to cooperate in the face of "selfish actions".

💬 President Vladimir Putin: It is only on the basis of honest and mutually beneficial cooperation that we can look for ways out of the critical situation that has emerged in the world economy because of the ill-conceived and selfish actions of certain states. pic.twitter.com/h6Wqzb2GNP

The Russian president further added that Moscow considers the theme of the meeting - 'Foster High-quality BRICS Partnership, Usher in a New Era for Global Development' - relevant. He drew attention to the fact that the complexity and transnational nature of the challenges and threats the international community faces require a search for collective responses with the bloc's active participation.

While concluding his speech, the Russian President stressed that challenges including conflict settlement, the fight against terrorism and organised crime, including the criminal use of new technologies, climate change, and the spread of dangerous infections can be tackled jointly. Putin said he is confident that today, as never before, the world needs the BRICS countries’ leadership in defining a unifying and positive course for forming a truly multipolar system of interstate relations based on the universal norms of international law and the key principles of the UN Charter. He added the BRICS nations can count on support from many states in Asia, Africa and Latin America, which are seeking to pursue an independent policy.