Biden Says Finland, Sweden Have ‘full, Complete Backing’ Of US

"It’s a very, very great day. I’m proud to welcome and offer the strong support of the United States for the applications of two great democracies," said Biden. 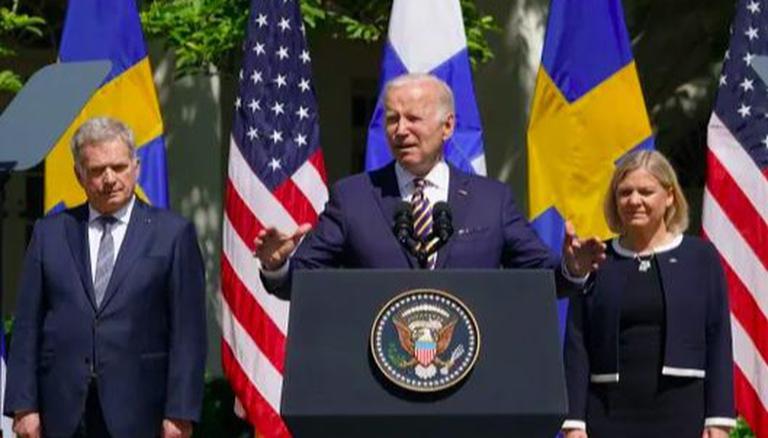 
US President Joe Biden on Thursday, May 19 welcomed Finnish President Sauli Niinistö and Swedish Prime Minister Magdalena Andersson to the White House as the two Nordic nations submitted their membership to NATO. The meeting between the three leaders allowed them "to coordinate on the path forward" and "compare notes" on the move. Speaking at White House in a trilateral press conference with Swedish and Finnish counterparts, Biden said that Sweden and Finland will 'make Nato stronger.

"It’s a very, very great day. I’m proud to welcome and offer the strong support of the United States for the applications of two great democracies, and two close, highly capable partners, to join the strongest, most powerful defensive alliance in the history of the world," US President Joe Biden said.

"Two proud independent countries exercising their sovereign right all states possess to decide their own security," he added.

US Presdient emphasized that the leaders of the two nations held “a good discussion” about Russia’s invasion of Ukraine and the “strengthening of transatlantic security." They have condemned Russia’s aggression that has “ruptured” European and transatlantic security, he iterated. "We have consulted closely at every stage as Sweden and Finland made their determination and today I’m proud to assure them that they have the full, total complete backing of the United States of America," said Biden. He stressed that his administration was in the process of submitting the formal report to NATO for the accession to Congress so the Senate can “efficiently and quickly move on advising and consenting to the treaty."

"The bottom line is simple. Finland and Sweden make Nato stronger... a strong, united Nato is the foundation of America’s security. New members joining Nato is not a threat to any nation. It never has been. Nato’s purpose is to defend against aggression," said  US President Joe Biden.

Finland’s president Sauli Niinistö meanwhile iterated that said his country made decision to join the NATO alliance after  “rapid but very thorough process" involving the overwhelming parliamentary majority as well as popular support. "Finland will be a strong Nato ally. We take our security very seriously. The Finnish armed forces are one of the strongest in Europe," said Niinistö. Biden stressed that Russian invasion has removed doubts about the significance of the NATO's defense alliance. he went on to add that the "indispensable alliance of decades past is still the indispensable alliance for the world we face today."

"Was Nato still relevant? Was it still effective? Is it still needed in the 21st century world? Today there is no question. Nato is relevant. It is effective and is more needed now than ever," said the US President Joe Biden.

US leader reiterated that Finland and Sweden's membership will be crucial for the NATO alliance that would grow to 32 member states. "Sweden and Finland have strong democratic institutions, strong militaries and strong and transparent economies, and a strong moral sense of what is right," said Biden.

WE RECOMMEND
Biden decries hate crimes against minorities at AAPI event, calls for 'equality'
Explained: Biden's first trip to Asia as US President & challenges POTUS is likely to face
New audit reveals around half of US President Biden’s 22.2M Twitter followers are 'fake'
Biden to travel to Japan for Quad Summit, have bilateral meetings with Modi
Biden to host leaders of Sweden, Finland amid NATO bids