US State Secretary Antony Blinken on Sunday upheld imposition of anti-Russian sanctions "as long as necessary" while addressing a presser after NATO FMs meet. 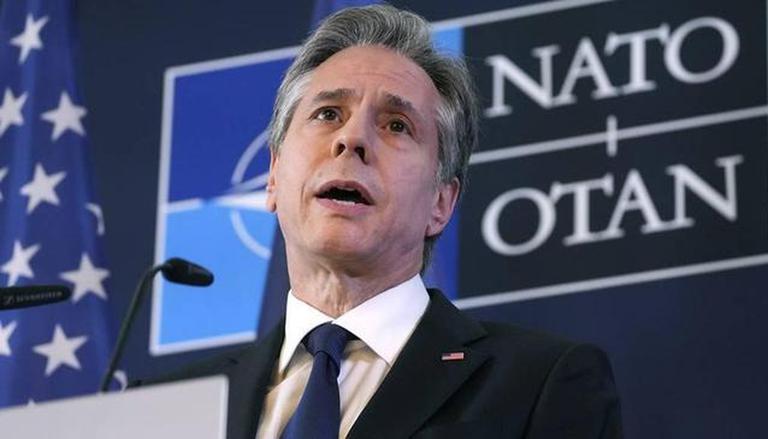 
US State Secretary Antony Blinken on Sunday upheld the imposition of anti-Russian sanctions "as long as necessary." Addressing a press briefing following the informal meeting between top diplomats of the North Atlantic Treaty Organisation (NATO) members, Blinken stressed all the 30 NATO allies are committed to supporting a "democratic, independent, and sovereign" Ukraine. He also lauded the "strength and resilience" displayed by the Ukrainian citizens in the three-month-long running war.

"Every member of the Alliance wants to bring this war to an end as soon as possible, but we are equally determined to maintain our security assistance to Ukraine, to continue our sanctions, export controls, and diplomatic pressure in Russia for as long as it's necessary," the US State Secretary said, as quoted in the official press release.

Blinken further emphasised that the US and its partners are also aligned over providing Ukraine "as strong a handbags possible on the battlefield, and at any negotiating table" to defend against Russian aggression. He also slammed Russian President Vladimir Putin for waging the "brutal and unprovoked" war attempted to "eliminate" Ukraine. He, however, further added that the invasion has only "reinforced and unified" Kyiv more than ever.

US & its partners come together to address consequences of Russian war

Addressing the press briefing, Antony Blinken recalled the billions of dollars worth of humanitarian and military assistance provided to Ukraine by the US and its partners. Blinken stated that the US has marshalled a robust transatlantic response to the humanitarian crisis caused by the war. "The US has provided millions of dollars in assistance to countries taking in Ukrainian citizens to help provide essential support. Out countries have also come together to address some broader consequences that the flowing from the Russian aggression..." If the US Senate approves a $40 billion aid package to Ukraine, Washington will have provided at least $53 billion worth of humanitarian and military assistance to Ukraine since the war began on February 24. The said bill also includes spending for European countries that are offering refuge to Ukrainians.

'We don't know how the world- war will unfold': Blinken

Apart from the worrisome exodus emerging from Ukraine, the Russian war has posed a massive threat to global food security, resulting from agricultural produce and distribution. While Ukraine is a major producer of staple food grains like corn, wheat, and oilseeds, Russia blocking Ukrainian ports, destroying farmland, and warehouses have left a rippling effect beyond Ukrainian borders. "We don't know how the rest of this world- war-will unfold," the US State Secretary said. Blinken informed that the UN Security Council (UNSC) this week will convene an emergency meeting to address immediate challenges over the global food crisis in the wake of the ongoing Russia-Ukraine war.