Decathlon Suspends Operations In Russia Amid War; 'Will Continue To Support Russian Staff'

Decathlon has backtracked and suspended its operations in Russia as supply conditions were no longer met to continue its activity in the country. 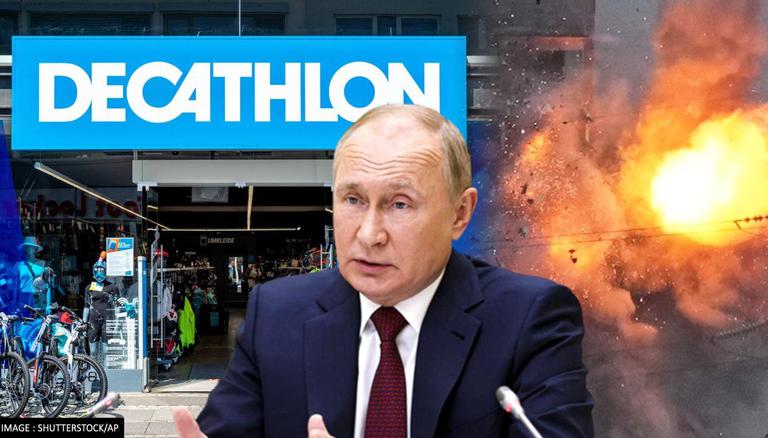 
As the intensifying Russia-Ukraine conflict enters day 34, French sportswear retailer Decathlon has backtracked and suspended its operations in Russia as supply conditions were no longer met to continue its activity in the country. The sportswear retailer has decided to follow the evolution of events, in line with other companies that have left Russia, and particularly the situation of those directly affected by the Ukraine invasion, as per Decathlon. The retailer, owned by the Mulliez Family, stated that it will continue to support its staff comprising 2,500 Russians, some of whom have been working in the company since 2006.

The Mulliez Family-owned retailer had announced that its current focus was on providing their Ukrainian teammates with accommodation and welcoming them into their homes. "Our efforts immediately focused on the safety and support of our 125 Ukrainian teammates, who also benefited from the solidarity of their colleagues in neighboring countries to help them find accommodation, or even to welcome them into their homes or to help them with their administrative procedures," read the statement on the company's website.

Why did Decathlon suspend operations in Russia?

Decathlon is owned by French retail giant Association Familiale Mulliez, that has been criticised for continuing its other businesses in Russia. Association Familiale Mulliez includes supermarket chain Auchan, which has 41,000 employees and 311 stores in Russia, according to their website. Decathlon decided to suspend its operations in Russia after being criticised by Ukraine's Foreign minister. "In strict compliance with international sanctions, Decathlon notes that the supply conditions are no longer met to continue its activity in Russia,'' the statement further said.

Decathlon iterated in its statement that the sportswear company ''has to suspend the operation of its stores'' in Russia. Meanwhile, it also informed that Decathlon's solidarity unit based in Poland, which is close to the needs, centralised their donations (equipment and essential products worth euro 2.6 million) to local NGOs. They have also set up a solidarity fund with euro 1 million to date to support the affected populations.

However, Association Familiale Mulliez which also runs high-profile chains such as DIY retailer Leroy Merlin and food retailer Auchan in Russia has come under pressure to vacate Russia following its invasion of Ukraine. Auchan which has around 30,000 staff, 231 stores, and e-commerce activities in Russia, has been condemned by Ukraine's President Volodymyr Zelensky for remaining operational in Russia.

Previously, Auchen released a statement stating "Our 30,000 Russian employees are doing the same job to be as close as possible to a population that has no personal responsibility in the outbreak of this war. Abandoning our employees, their families, and our customers is not the choice we have made. As French President Emmanuel Macron has said, "we are not at war with the Russian people."