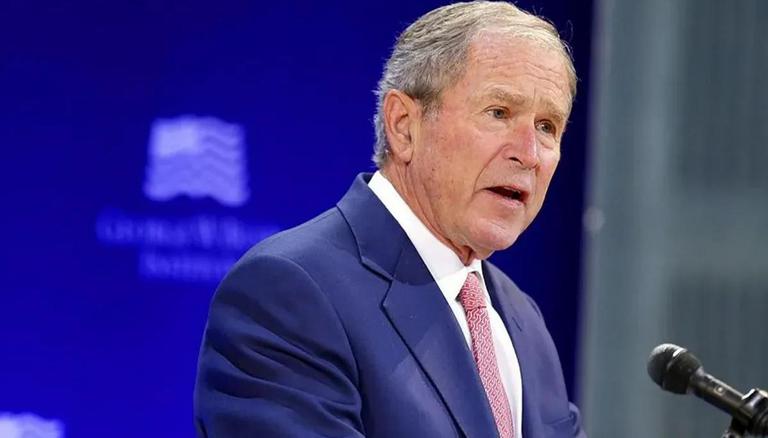 
Former US President George W Bush made an embarrassing gaffe when discussing Russian President Vladimir Putin's invasion of Ukraine. He made the mistake of criticising the "wholly unjustified invasion of Iraq" instead of Ukraine during a speech in Dallas, Texas on May 18. Bush was speaking at an event about the importance of democracy and the threats to democracy in the United States and around the world. It is worth mentioning here that in 2003, it was under his leadership that US forces attacked Iraq.

While denouncing Russia's "rigged elections" and suppression of political opponents, George W Bush stated, "The result is a lack of checks and balances in Russia, and the decision of one man to launch a wholly unjustified and brutal invasion of Iraq."

"I mean, Ukraine," he clarified quickly, shaking his head as the audience laughed. As he continued his speech, the 75-year-old former leader jokingly reminded the audience of his age. "Iraq, too," he grumbled under his breath, adding, "Anyway, 75," he said referring to his age.

Speaking in Dallas this afternoon, former President George. W Bush made a significant verbal slip-up while discussing the war in Ukraine.

He tried referencing what he described as the “wholly unjustified and brutal invasion” — but said Iraq, instead of Ukraine. pic.twitter.com/tw0VNJzKmE

Bush, who was president of the United States from 2001 to 2009, led the US invasion of Iraq in 2003 under the guise that Iraq was harbouring weapons of mass destruction. Later, the claim was proven false. Years of war followed the invasion, with thousands killed, injured, and displaced.

Back then, George W. Bush of the US and ex-UK Prime Minister Tony Blair stated that their goal was to "disarm Iraq of weapons of mass destruction, to end Saddam Hussein's support for terrorism, and to free the Iraqi people." However, prior to the start of the invasion, a United Nations inspection team discovered no such weapon. Many had condemned Bush's invasion and urged him to find a diplomatic solution. Some of the US's allies, including France, Canada, Germany, and New Zealand, had also spoken out against the Iraq war.

Bush's gaffe provided fodder for his detractors to mock the former US President. Former Ohio state senator Nina Turner stated, "Freudian slip if I ever saw one! He told the truth for once! The decision of one man to launch a wholly unjustified and brutal invasion of Iraq—I mean Ukraine—Iraq, too. George W. Bush just admitted to being a war criminal of the likes of Vladimir Putin, then laughed. Sickening," she tweeted.

George W. Bush: “The decision of one man to launch a wholly unjustified and brutal invasion of Iraq—I mean Ukraine—Iraq, too.”

Freudian slip if I ever saw one! He told the truth for once! pic.twitter.com/BavmfkWTyN

Former US Congressman Justin Amash stated, "If you were George W. Bush, you think you’d just steer clear of giving any speech about one man launching a wholly unjustified and brutal invasion."