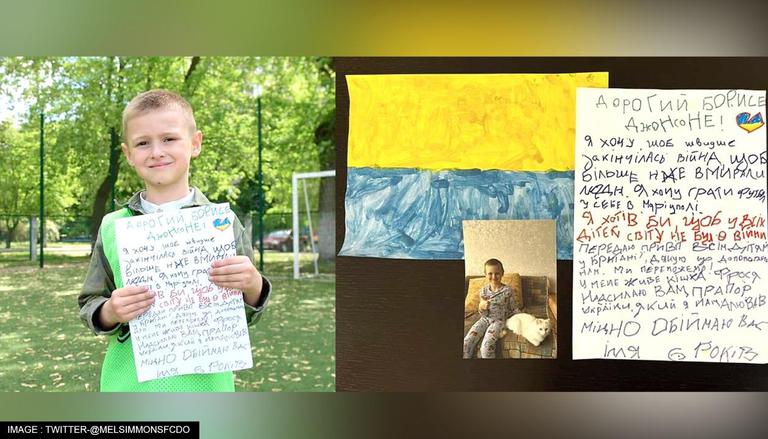 
After the UK Prime Minister wrote a letter to Ukrainian children, a six-year-old boy named Ilya Kostushevych, who lost his family and was rescued by volunteers in Mariupol, decided to respond to Boris Johnson. Along with a handwritten letter, the child sent photo of his cat Frosia and the Ukrainian flag that he drew. He lauded the British Prime Minister for assisting Ukraine in the midst of Russian aggression and said that he is hoping that the war ends soon and innocent people don't lose their life anymore. In the letter, he even described his wish to play football at his home in Mariupol.

Kostushevych wrote, “Dear Boris Johnson! I want the war to end sooner so that people don’t die anymore. I want to play football at home in Mariupol. I would like all the children of the world not to have a war. Greetings to all the children in Britain, thank you for helping us. We will win! I have a cat, Frosia. I am sending you the flag of Ukraine that I drew. I hug you tightly.”

It is to mention that the boy's parents were killed in the Russian missile attack on Mariupol. The street and the neighbourhood in which he and his family resided were utterly devastated by the attack. The six-year-old was successfully rescued by the volunteers. Right now, Maria and Volodymyr Bespalykh from Slovyansk are looking after him, according to Zaborona.

The Prime Minister of the United Kingdom issued an open letter to Ukrainian youngsters, praising them as a model of bravery and a true inspiration for children and adults all over the world. The letter was drafted in both English and Ukrainian. On April 9, 2022, during a visit to Kyiv, the British Prime Minister mentioned the lack of children and young people on the streets.

To all the children of Ukraine: You are not alone. We stand with you. pic.twitter.com/aFzLK2gJu7

In the letter, Johnson said that after the invasion, many of the children were compelled to flee their homes abandoning their families, friends, pets, toys and everyday life, seeking refuge at train stations, far-flung cities, and even foreign countries. He claimed that he can't imagine how difficult this year was for them. In the letter, he also stated that Ukrainian flags are displayed in homes, shops, churches and even playgrounds in the United Kingdom.