On Friday, the Kramatorsk Railway Station in Ukraine’s Donetsk People's Republic (DPR) was hit by Tochka-U missiles, leading to the death of at least 30 people. 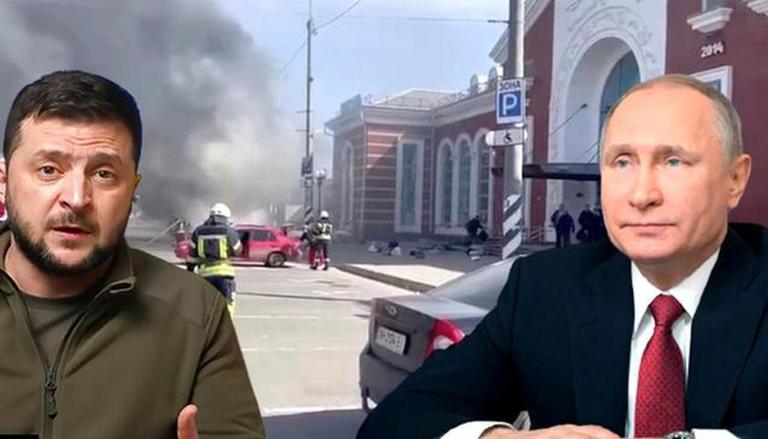 
On Friday, the Kramatorsk Railway Station in Ukraine’s Donetsk People's Republic (DPR) was struck by Tochka-U missiles, leading to the death of at least 30 people while over 100 were injured. In the wake of the attack, Ukrainian President Volodymyr Zelenskyy accused Russia of “destroying the civilian population” and stated that Russia was “evil with no limits.” However, the Kremlin denied any involvement in the strike, branding the allegations as "absolutely untrue". However, a video that is now circulating online shows a fragment of the missile with the inscription ‘for children’ written in the Russian language on it.

On the fragment of the missile that hit the train station in #Kramatorsk, an inscription in #Russian, "For Children," is visible. pic.twitter.com/DAek1bvG6c

According to Ukraine’s Prosecutor General, at least 169 children have been slain in the ongoing war. In addendum, at least 306 others have been wounded Putin announced his ‘special military operation’ on Ukraine. The Prosecutor General's Office of Ukraine, highlighting the horrific civilian massacre in the Bucha region, revealed that "the body of a 15-year-old girl was recovered among the adult victims in a mass grave." The Prosecutor General's office, on the other hand, claims that the number of children killed in the war is likely to be higher.

READ | Zelenskyy pulls up nations for half-baked sanctions on Russia; 'If you hold gun, shoot it'

Meanwhile, in a Global Mega Exclusive interview with Republic Media Network's Editor-in-Chief Arnab Goswami on Thursday, Ukraine's President Zelenskyy committed for the first time that Ukraine would not use the weapons coming from the West to attack Russia. It is pertinent to note that this is the first such unequivocal declaration by Ukraine ever since the onset of the Russian invasion. President Zelenskyy’s commitment included the statement wherein he noted that he would use the weapons to defend Ukraine and not attack Russia.

This comes as Russia's war against Ukraine continued for the 44th day on Friday. While Russian troops are continuing to withdraw, the Ukrainian Foreign Ministry said that the country was still "vulnerable". Meanwhile, more discoveries are being made in Bucha where authorities discovered at least three mass graves. Mayor Anatoliy Fedoruk said that some corpses were found with their hands tied and were "dumped like firewoods". In the wake of the same, UNGA expelled Moscow from UN Human Rights Council on Thursday.