For Moscow to establish a corridor, “it's either to demine territory which was mined by Ukrainians, or passage goes around those mines," Russia's amb to UN said 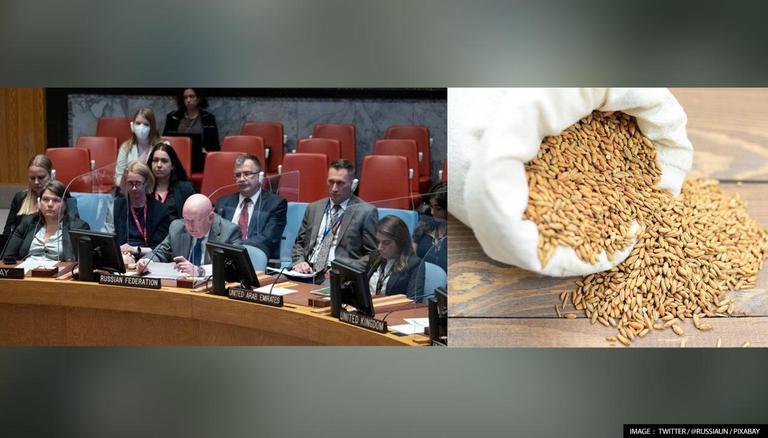 
Russia on Wednesday said that it could provide safe passage for grain exports from Ukraine, although it rejected the prospects of establishing a corridor as suggested by Turkey earlier. Speaking at a meeting of the United Nations, Russia's UN Ambassador Vassily Nebenzia stressed, "We're not responsible for establishing safe corridors. We said that we could provide safe passage if these corridors are established."

The latter was responding to the question asked by a reporter whether there was no longer a need for demining in the Black Sea for grain exports from Ukraine, as claimed by Turkish Foreign Minister Mevlut Cavusoglu. Turkey claimed that safe corridors could be opened and Russia is expected to respond to a UN plan to facilitate the exports.

For Moscow to establish a corridor, “It is obvious it's either to demine the territory which was mined by the Ukrainians or to ensure that the passage goes around those mines," Nebenzia iterated.

#Nebenzia: As Adviser to the President of #Ukraine M.Podolyak revealed to NYT recently, the Ukrainian 🇺🇦military will use the methodology of #urban combat. It means that they will keep using civilians as human shields and destroy civilian infrastructure.https://t.co/7NmKL6p0Q1 pic.twitter.com/aUJfflDiRU

Ukrainian grain shipments for export to the international market have stalled after Russian troops blockaded key ports in the Black Sea stoking global prices for grains, cooking oils, fuel, agricultural products and fertilizer. Turkish foreign minister Mevlut Cavusoglu had said that Ankara is holding talks with the Russian delegation on the United Nations' proposal to free the Ukrainian grain from blockaded Odesa and other key ports in the Black Sea. "Since the location of the mines is known, certain safe lines would be established at three ports," Cavusoglu had said. He further reiterated that the commercial ships that would use the guidance of Ukrainian vessels as detailed in the plan, "could thus come and go safely to ports without a need to clear the mines."

An estimated 22 million tonnes of grain that has been sitting in silos to be shipped out will be transported by Russia, Cavusoglu claimed at the state presser. UN Secretary-General Antonio Guterres has been working on a package for weeks that would enable Ukraine to export wheat and other major commodities from Odesa. The UN Chief has refused to divulge the exact details of the arrangement, saying that it would “jeopardise the plan’s chances of success.” The UN is involved in working in "close cooperation with the Turkish authorities on this issue," said UN spokesman Stephane Dujarric at a conference. "In order for this to go forward there will be a need for agreement from the Ukrainian side, from the Russian side," Dujarric added.