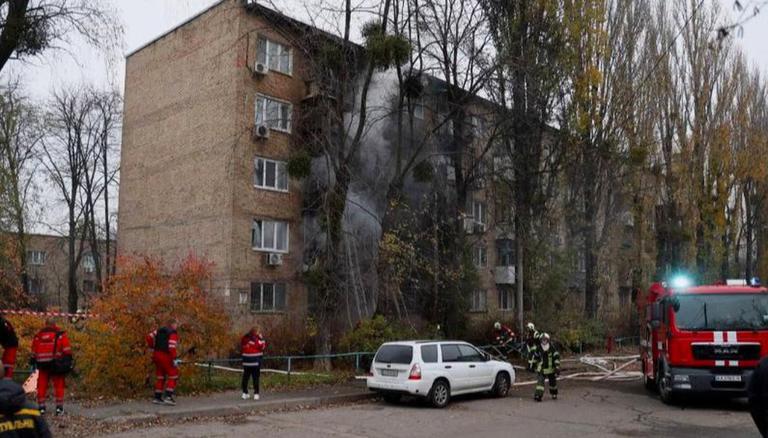 
Moldova on Tuesday experienced major power outages after Russia's military launched over a hundred missiles on Ukraine’s energy infrastructure that downed a key power line that supplies electricity to the small neighbouring nation to Russia, Ukraine's Infrastructure Minister Andrei Spinu said in a statement. Spinu stated that the downed power lines “were not damaged, but were automatically disconnected as a safety measure."

The power outage was confirmed shortly after 6:30 p.m. local time (1630 GMT) as Russia's troops fired a barrage of missiles across different Ukrainian cities, just a day after they pulled out from the Ukrainian region of Kherson. “Russian aggression against Ukraine directly affects our country,” Spinu wrote on Facebook.

The aftermath of rocket strike on Kyiv.

This is how Russia "forces" Ukraine to negotiate. But they forgot that terrorists always lose.

A Ukrainian air force spokesman said Russia fired around 100 missiles. Meanwhile, Prime Minister of neighbouring Poland Mateusz Morawiecki also reportedly called an urgent meeting of the Council of Ministers Committee on National Security and Defense. Explosions were reported in the Polish town Przewodów not far from the Ukrainian border. Two people died, according to the pro-Ukraine Telegram channels.

Air defenses at work in Kiev, with smoke pic.twitter.com/2dLktnad37

⚡️ 73 out of more than 90 CRUISE MISSILES shot down! As well as 10 enemy kamikaze drones!
Glory to the Air Forces of Ukraine! You are the best of the best! Everyone in Ukraine is grateful to you! Everything will be Ukraine 🇺🇦

UKraine President Volodymyr Zelenskyy said that nearly 85 missiles were launched and more are yet to come as he wrote: “I know that the strikes turned off energy in many places… We are working, we will restore everything, we will survive.”

Moldova’s pro-Western president, Maia Sandu, issued strong criticism of Russia's aggression, saying that the missile strikes in Ukraine have ultimately plunged “dozens of localities” in Moldova into darkness. “The risks of power outages remain high. Any bombing by Russia against Ukrainian power plants may lead to a repeat of today’s situation. They hit the civil and energy infrastructure of the neighboring country, endangering the lives and safety of tens of thousands of people,” Sandu wrote on Facebook.

“Russian attacks on Ukraine also caused the automatic disengagement of a line that provides electricity transportation for our country, and dozens of localities were left without light,” she said, adding that “specialist services are working to resolve the situation," Moldova’s president, Maia Sandu said.

Ukraine's Infrastructure Minister Spinu, meanwhile, noted that following Russia’s bombardment against the Ukrainian energy system in the last hour, "one of the power lines that ensures the transport of electricity for our country has been disconnected. This has led to massive power outages across the country." At least one person is reported dead in Kyiv, as the Russian military launched rockets on the residential buildings leaving the civilians without electricity and water. Ukrainian Energy Minister Herman Halushchenko said on Facebook that the Russian strikes were the most intense and deadly since the start of the war that crippled Ukraine’s energy infrastructure. Officials confirmed that the Russian missiles sabotaged the power lines of neighbouring Moldova, a former Soviet republic located between Romania and Ukraine.

Russian missiles came raining down on Ukraine's Lviv and Zhytomyr in the west, Kryvy Rih in the south and Kharkiv in the east, and Kyiv. Air raid sirens sounded in a number of regions, including Lviv and Kharkiv. Ukrainian officials said that the missiles launched into Ukraine today were the heaviest wave of strikes in nearly nine months of the war. Energy facilities were damaged which caused the emergency blackouts. Senior Ukrainian official, Kyrylo Tymoshenko, termed the situation as ‘critical’ and urged Ukrainians to cut on the power usage and "hang in there." Russian troops intensified the assault after Ukrainian armed forces reclaimed the southern city of Kherson in one of the biggest military successes that resulted in Russia's biggest humiliating defeat in the nearly nine-month invasion.