Ukrainian President Volodymyr Zelenskyy predicted that Russia would intensify attacks this week and even warned the European partners that they should gear up. 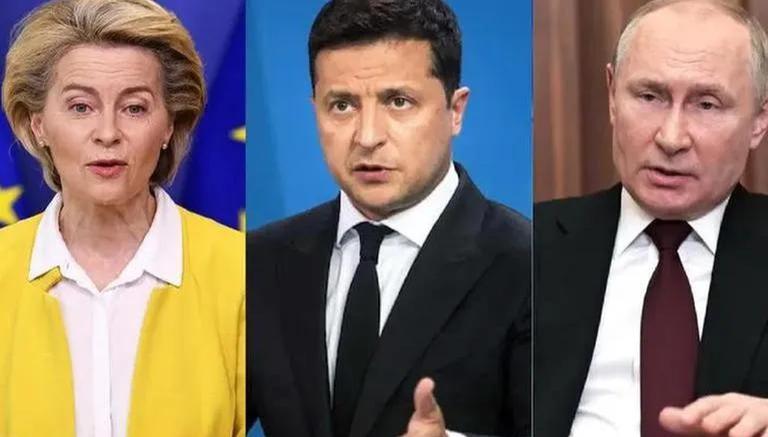 
Ukrainian President Volodymyr Zelenskyy on Monday said that the looming decision on Ukraine's candidacy in the European Union is making Russia "very nervous".  As Russia continued its "brutal offensive actions" in the western, eastern, and southern districts of the war-torn country, Zelenskyy during his usual nightly address on Monday stated that the whole region of Kharkiv, Odesa, and Donbass "is the most difficult as there are the hardest battles."

"The next days of the week will also be busy. We are moving toward the main decision of the European Council, which will be adopted on Friday...As I predicted, Russia is very nervous about our activity,” Zelenskyy said.

Earlier, the European Commission had recommended granting Ukraine the candidate status to join the bloc which amounted to a diplomatic blow for the Kremlin. In view of this, Zelenskyy on Sunday predicted that Russia would intensify attacks and even warned the European partners that they should gear up for increased hostilities by Moscow.

In his nightly address on Sunday night, Zelenskyy said, “Tomorrow a historic week begins…There have been few such fateful decisions for Ukraine.”

“And in such a week, we should expect greater hostile activity from Russia. And not only against Ukraine, but also against other European countries. We are preparing. We are ready. We warn partners,” he added.

The Ukrainian President’s warnings come as the European leaders are expected to convene and give the final answer on the war-ravaged nation’s fast-tracked membership application. Notably, even though Russian President Vladimir Putin said that he has “nothing against” Ukraine’s EU membership, a Kremlin spokesperson reportedly said that Moscow was closely monitoring Kyiv’s bid.

It is to mention here that the EU’s acceptance of Ukraine would put Kyiv on track to realise the aspiration that would have been out of reach for the former Soviet republic before Russia announced the “special” military operation in late February. In a statement on Sunday, the Ukrainian Parliament’s speaker, Ruslan Stefanchuk said, “Whole generations fought for a chance to escape from the prison of the Soviet Union and, like a free bird, to fly to European civilisation”.

Zelenskyy’s declaration of the “historic week” follows remarks by the Vice President of the European Parliament, Katrina Barley who warned against lowering entry conditions. Earlier, the EU Commission had recommended that Ukraine and Moldova should be formally designated as applicants for EU membership. Barley, however, stated that Kyiv must completely implement the norms of the bloc and that the EU should not push the war-ravaged nation into membership.

"There must be no hasty accessions. Anyone who is in the EU cannot be excluded. You can currently see that in Hungary, which is systematically undermining the rule of law," Barley told the Neue Osnabrucker Zeitung on June 18.

“It is all the more important that the criteria laid down for accession, such as institutional stability, a functioning market economy and the rule of law, are fully met," she added.