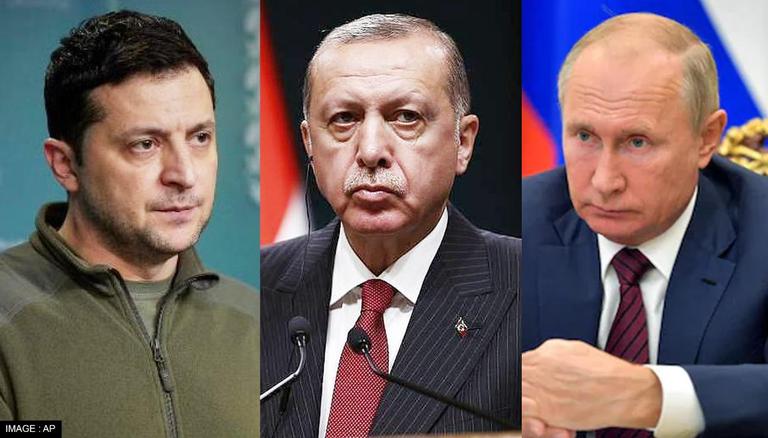 
Turkish President Recep Tayyip Erdogan has planned to hold a telephonic conversation with his Russian counterpart Vladimir Putin and Ukraine's President Volodymyr Zelenskyy on May 30. The development has been announced by Turkey's Directorate of Communications on Twitter. Erdogan aims to encourage Russia and Ukraine to use "dialogue and diplomacy" to address the issues.

"I will have phone calls with both Russia and Ukraine on Monday. We will continue to encourage the parties to use the channels of dialogue and diplomacy."

Earlier on May 19, Erdogan announced that he does not plan to break his ties with Russian President Vladimir Putin or Ukrainian counterpart Volodymyr Zelenskyy. The Turkish President said that he will continue to hold talks with the presidents of Russia and Ukraine and stressed that Turkey has "ties with both sides", Sputnik reported. Erdogan made the statement at a meeting with students at the presidential library in Ankara. Turkish President Erdogan underscored that they continue to make efforts as a "new world war will not benefit Turkey or the world."

Recep Tayyip Erdogan emphasised that they continue to work with Russia on nuclear energy. He said that they will complete the development of the Akkuyu Nuclear Power Plant in 2022 and open it in 2023, as per the Sputnik report. He described it as a "very serious source of energy" for Turkey and stressed that they import 50% of the total consumed gas from Russia.

Erdogan called Turkey's ties with Russia "strategic relations" which he stressed cannot end. It is to mention here that the last face-to-face talks between the delegation of Russia and Ukraine took place in Istanbul on March 29. Meanwhile, Russian President Putin in his talks with the Austrian Chancellor on Friday, 28 May, accused Ukraine of "sabotaging" negotiation talks between the Russian and Ukrainian sides.

The Russian military offensive which started on February 24 has entered day 95. The United Nations on Friday, May 27, said that as many as 4,031 civilians have been killed, and 4,735 others have been injured since Russia began its military aggression against Ukraine. The hostilities between the two warring nations have led to people fleeing their homes in Ukraine and moving to neighbouring nations.

Furthermore, Russia and Ukraine have accused each other of blocking Ukrainian ports and not allowing the export of grains. Ukraine has claimed that nearly 30,150 Russian troops have been killed since Russia's offensive began on February 24.