As the war has now continued for 129 days, Ukraine on Saturday accused Russia of carrying out phosphorus munition strikes on Zmiinyi Island a.k.a Snake Island. 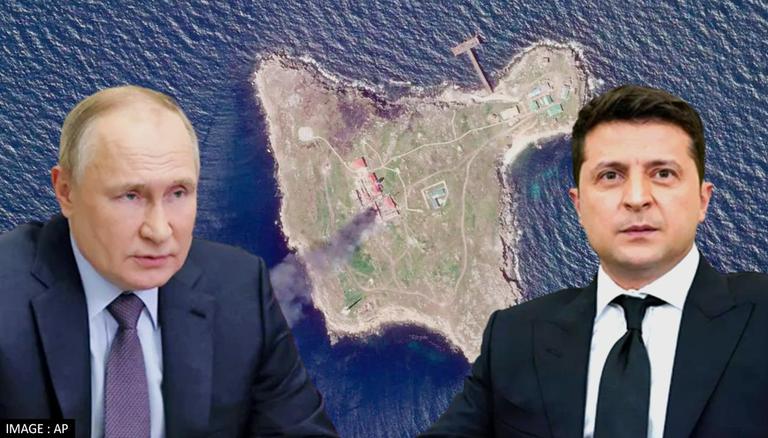 
As the war has now continued for 129 days, the Ukrainian Armed Forces on Saturday accused Russia of carrying out phosphorus munition strikes on Zmiinyi Island a.k.a Snake Island. This comes after Ukraine's Defence Ministry claimed Russian troops "hastily" withdrew from the rocky land on the Black Sea, leading Kyiv to a small but strategic victory amid the ongoing blockade of southern sea ports by Moscow's fleet. "Today at around 18:00 hours (local time) Russian air force SU-30 planes conducted strikes with phosphorus bombs on Zmiinyi Island, twice," the Ukrainian Defence Ministry said in a statement.

A video attached with the statement showed what appears to be an aircraft releasing a white trail of gas in the air before dropping munitions on the outcropped island on the Black Sea. Lashing out at the Russian Federation on Friday , Ukraine's General Staff of Armed Forces alleged that "their leadership does not comply with their own statements and respect their own declarations," adding that the invaders launched two strikes a day after Moscow claimed they "completed their tasks" in the landmass. "Everyone who talks about agreement must know these facts that only Russians are consistent with hitting," the Ukrainian Defence statement said.

To note, Ukraine has reported the use of phosphorus munitions by Russia multiple times since the war began on February 24. These weapons leave a signature white trail in the sky and are banned for use under the UN's international convention, except for use on military targets. However, despite the ban, Kyiv alleged that Russia has pounded civilians with phosphorus bombs- a claim that Russia denies.

Meanwhile, powerful blasts rocked the Ukrainian city of Mykolaiv early on Saturday. Before the explosions, the mayor said air raid sirens were heard across the Mykolaiv region, which borders the vital exporting port of Odesa. “There are powerful explosions in the city! Stay in shelters!” Oleksandr Senkevich, the mayor, wrote on the Telegram messaging app. It is yet to be confirmed what caused the explosions.

Zelenskyy's remarks come after Russian troops pulled back from the Zmiinyi Island a.k.a. Snake Island. The Ukrainian President called it a strategic victory in the Black Sea region. Ukrainian Southern Command took to Facebook to announce the news, saying that the coordinated overnight strike led the "opponent to hurriedly evacuate" remains of the garrison in the craggy speck of land in the Black Sea. The command also posted a picture showing the aftermath of the fierce battle to liberate the island. The still image showed the island covered in thick plumes of black smoke rising from several pockets. "Unable to withstand the impact of our artillery, missile, aviation units, the Russian occupiers have left," the Ukrainian military said in its update.

The Kremlin, however, has portrayed its evacuation as a "gesture of goodwill" blindsiding Ukraine's claims of powerful defence. The Russian Defence Ministry said the troops on the island had "completed their tasks" and emptied their garrison stationed there. It added that the pullout was aimed at showing the world that Moscow was not "impeding UN efforts to organise humanitarian corridors for agricultural products from Ukraine."