Ukraine's president has implored the world to punish Russia for its invasion, even as the leader vowed his forces would win back every inch of territory despite Moscow's decision to redouble its war effort. 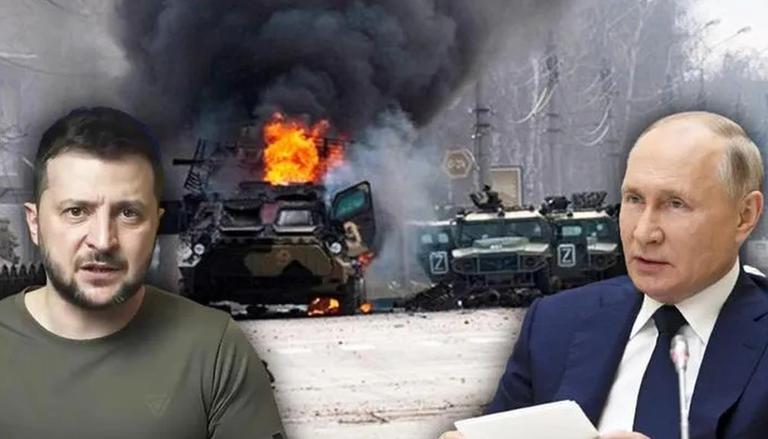 
Ukraine's president has implored the world to punish Russia for its invasion, even as the leader vowed his forces would win back every inch of territory despite Moscow's decision to redouble its war effort.

In a much-anticipated video address to the UN General Assembly hours after Russia on Wednesday announced it would mobilise some reservists, Volodymyr Zelenskyy portrayed the declaration as evidence the Kremlin wasn't ready to negotiate an end to the war — but insisted his country would prevail anyway.

“We can return the Ukrainian flag to our entire territory. We can do it with the force of arms,” the president said. “But we need time.” Putin's decree on Wednesday about the mobilisation was sparse on details. Officials said as many as 300,000 reservists could be tapped. It was apparently an effort to seize momentum after a Ukrainian counteroffensive this month retook swaths of territory that Russians had held.

But the first such call-up in Russia since World War II also brought the fighting home in a new way for Russians and risked fanning domestic anxiety and antipathy toward the war.

Shortly after Putin's announcement, flights out of the country rapidly filled up, and more than 1,000 people were arrested at rare antiwar demonstrations across the country.

A day earlier, Russian-controlled parts of eastern and southern Ukraine announced plans for referendums on becoming parts of Russia. Ukrainian leaders and their Western allies consider the votes illegitimate.

Zelenskyy didn't discuss the developments in detail. But he suggested that any Russian talk of negotiations was only a delaying tactic, and that Moscow's actions speak louder than its words.

Russia hasn't yet had its turn to speak at the gathering.

Putin, who is not attending the event, has said he sent his armed forces into Ukraine because of risks to his country's security from what he considers a hostile government in Kyiv; to liberate Russians living in Ukraine — especially its eastern Donbas region — from what he views as the Ukrainian government's oppression; and to restore what he considers to be Russia's historical territorial claims on the country.

Zelenskyy's speech was striking not only for its contents but also its context. It took place after the extraordinary mobilisation announcement.

It was the first time he addressed the world's leaders gathered together since Russia invaded in February.

It wasn't delivered at the august rostrum where other presidents, prime ministers and monarchs speak — but instead by video from a nation at war after Zelenskyy was granted special permission to not come in person.

He appeared as he has in many previous video appearances — in an olive green T-shirt. He sat at a table with a Ukrainian flag behind his right shoulder and large image of the UN flag and Ukraine's behind his left shoulder.

Zelenskyy's speech was one of the most keenly anticipated at international diplomacy's most prominent annual gathering, which has dwelled this year on the war in his country.

Officials from many countries are trying to prevent the conflict from spreading and to restore peace in Europe — though diplomats do not expect any breakthroughs this week.

Still, the topic popped up in speeches by leaders from all over the world. Overwhelmingly, the sentiment was similar: Russia's invasion was not consistent with the cornerstone principles of the United Nations — including peace, dialogue and respect for sovereignty.

"It's an attack on this very institution where we find ourselves today,” said Moldovan President President Maia Sandu, whose country borders Ukraine.

US President Joe Biden's address, too, focused heavily on the war in Ukraine.

“If nations can pursue their imperial ambitions without consequences, then we put at risk everything this very institution stands for. Everything.” Zelenskky opined that Moscow wants to spend the winter preparing its forces in Ukraine for a new offensive, or at least preparing fortifications while mobilising more troops in the largest military conflict in Europe since the Second World War.

“Russia wants war. It's true. But Russia will not be able to stop the course of history,” he said, declaring that “mankind and the international law are stronger” than what he called a “terrorist state”.

Laying out various “preconditions for peace” in Ukraine that sometimes reached into broader prescriptions for improving the global order, he urged world leaders to strip Russia of its vote in international institutions and UN Security Council veto, saying that aggressors need to be punished and isolated.

The fighting has already prompted some moves against Russia in UN bodies, particularly after Moscow vetoed a UN Security Council resolution that would have demanded a stop to its attack on Ukraine days after it began.

The veto galled a number of other countries and led to action in the broader General Assembly, where resolutions aren't binding but there are no vetoes.

The assembly voted overwhelmingly in March to deplore Russia's aggression against Ukraine, call for an immediate cease-fire and withdrawal of all Russian forces, and urge protection for millions of civilians.

The next month, members agreed by a smaller margin to suspend Russia from the UN Human Rights Council.

Despite the attention he drew, Zelenskyy was just one of dozens of leaders speaking on Wednesday — among them Iranian President Ebrahim Raisi and Kenya's newly elected president, William Ruto. Nearly 150 heads of state and government are set to appear during six days of speeches.

It also wasn't the first time the Ukrainian leader has been in the spotlight at the assembly's annual meeting.

His 2019 debut speech came as Zelenskyy suddenly found himself embroiled in a political scandal that was absorbing the US — then-President Donald Trump's effort to get the Ukrainian to investigate his eventual rival Biden and his son Hunter.

Zelenskyy steered clear of the affair in his speech that year, but he was barraged with questions about it at a news conference with Trump. The episode ultimately led to Trump's first impeachment.

At last year's General Assembly, Zelenskyy memorably compared the UN to “a retired superhero who's long forgotten how great they once were” as he repeated appeals for action to confront Russia over its 2014 annexation of Ukraine's Crimean peninsula and its support for the separatists.