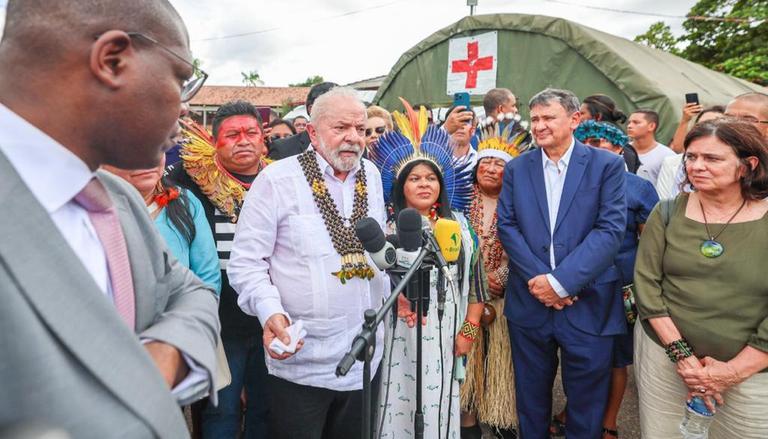 
Brazilian President Luiz Inácio Lula da Silva, on Saturday, accused former President Jair Bolsonaro’s administration of committing genocide against the Yanomami people of the Amazon, amid public outrage over a humanitarian catastrophe in the country’s largest Indigenous territory. Lula visited the Amazon state of Roraima on Saturday to denounce the plight of the Yanomami, whose supposedly protected lands have been plunged into crisis due to government neglect and the explosion of illegal mining, reported The Guardian

“More than a humanitarian crisis, what I saw in Roraima was a genocide. A premeditated crime against the Yanomami, committed by a government impervious to the suffering of the Brazilian people,” Lula tweeted on Sunday, one day after visiting an overcrowded clinic for Yanomami patients in Roraima’s capital, Boa Vista.

Brazilian justice minister, Flávio Dino, also tweeted that he would order a federal police investigation into “strong indications” the Yanomami had suffered crimes including genocide – meaning the deliberate attempt to partially or completely destroy an ethnic, national, racial or religious group.

Horrifying photographs of emaciated Yanomami children and adults emerged on the eve of Lula’s trip, laying bare the scale of the health crisis facing the territory’s estimated 30,000 Indigenous inhabitants. “The photos really shook me because it’s impossible to understand how a country like Brazil neglects our Indigenous citizens to such an extent,” the president told media in Boa Vista.

Lula blamed his far-right predecessor for forsaking Indigenous communities and encouraging the thousands of wildcat miners who flooded the Portugal-sized Yanomami enclave during Bolsonaro’s 2019-2022 government, reported The Guardian. Those miners contaminated rivers and wrecked forests, depriving remote Yanomami communities of key food sources – fish and other animals such as monkeys and wild boars – while simultaneously spreading malaria and hampering the efforts of government health workers.

“As well as the disregard and neglect of the last government the main cause of this genocide is the invasion of 20,000 illegal miners, whose presence was encouraged by the ex-president. These miners poison rivers with mercury, causing destruction and death,” Lula wrote, pledging: “There will be no more genocides.”

On Sunday, former Brazilian president Dilma Rousseff took to Twitter that the the 570 Yanomami children who had reportedly died of hunger or mercury poisoning since 2019 were proof of the “Yanomami genocide”. “There is a motive: the greed of the miners who invaded their lands. And there is a perpetrator: Jair Bolsonaro, who championed this invasion and denied medical assistance to the Indigenous,” Rousseff wrote on Twitter. “All of those who are responsible, Bolsonaro included, must be prosecuted, judged and punished for genocide,” Rousseff added.

Bolsonaro denied responsibility, calling such accusations a “left-wing farce”, reported The Guardian. The former president – who is notorious for his prejudiced comments about black and Indigenous citizens - claimed Indigenous healthcare had been one of his government’s priorities.