Brazil Prez Jair Bolsonaro is scheduled to take part in a video conference with the Brazilian truckers' union to refrain them from halting traffic on highway. 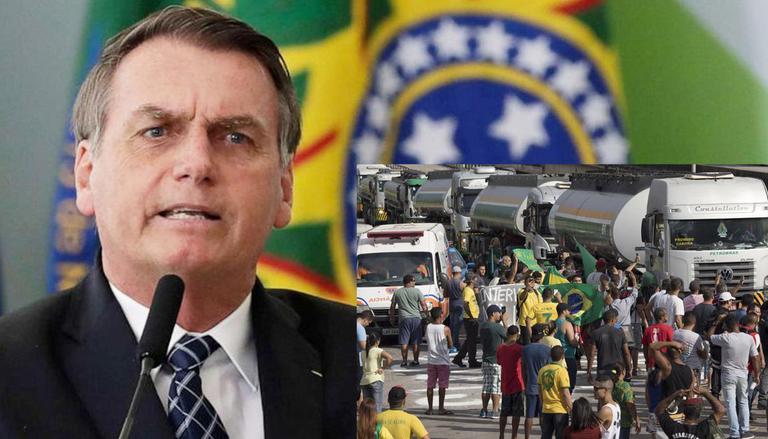 
Brazil President Jair Bolsonaro is scheduled to take part in a video conference with the Brazilian truckers' union to refrain them from halting traffic on highways. The truckers' association has blocked roads along 14 Brazilian National Highways, including Bahia, Maranhao, Minas Gerais, Mato Grosso do Sul and Santa Catarina, Al Jazeera reported, quoting the Brazil Infrastructure Ministry. The truckers are demonstrating in support of the Brazilian President, who lambasted the apex court for preventing him from governing.

The protest began on 7 September, Tuesday, with the truckers partially blocking the highways over spiking fuel prices in the country and expressing solidarity with the President's "call to action" against the Supreme Court during the Tuesday political rally. However, the demonstrations gained momentum after President Bolsonaro failed to decry the protestors. The Brazilian truckers' have stood in support of the President since he backed the association over high fuel prices.

Bolsonaro at loggerheads with the Supreme Court

Only God will take me out of Brasilia,” the Brazilian PM told a crowd of 114,000 supporters on Sao Paulo’s Paulista Avenue on 7 September afternoon, according to local military police estimates.

In recent months, the Brazilian President has repeatedly slammed the Brazilian apex court for hindering his freedom of governance. With the Brazil democratic elections just around the corner, Bolsonaro has once again emerged with controversial comments. On 7 September,  the President asserted "only God will take me out of Brasilia," at a presidential re-election campaign at Sao Paolo. Speaking during the Brazilian Independence Day, Bolsonaro also insinuated that the Supreme Court needed a replacement of justices.

READ | Brazil: Ahead of re-election campaign, Bolsonaro claims 'only God' can oust him from power

Meanwhile, pre-poll markers have displayed a considerable fall in Bolsonaro's ranking owing to his lax in handling COVID-19 and subsequent corruption charges. Additionally, the country also witnessed a staggering economic crisis under his leadership. Last month, he was again accused of engaging in a plot to skim the salaries of its aides.

Following the rightist leader's claims against the Supreme Court rulings, the Chief Justice of Brazil’s Supreme Court had said that President Jair Bolsonaro was undermining the apex court by disobeying the verdict of its justices. "The Supreme Court will not tolerate threats to the authority of its decisions,” Chief Justice Luiz Fux said in a court session.