Number 10 where UK PM Boris Johson works and lives defended him in a statement claiming that his meetings often took place outside during the summer months. 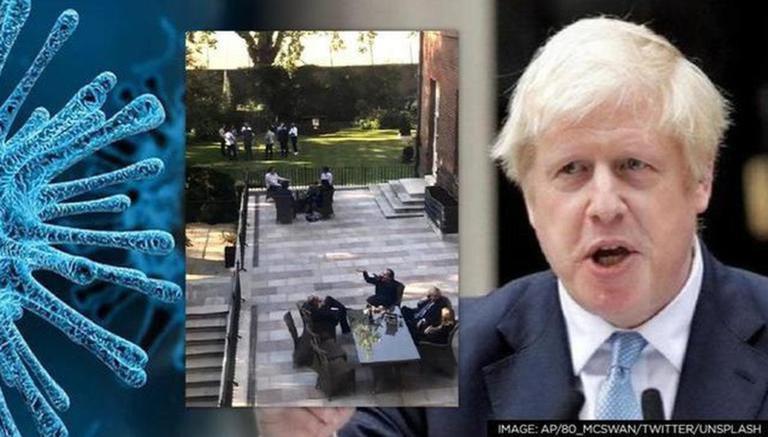 
UK Prime Minister Boris Johnson on Tuesday, Dec. 21 spoke out in his defence regarding The Guardian’s leaked image from Downing Street where he, his then-fiancee Carrie, and 17 other staff were seen converging on the lawn with wine and cheesecake. The gathering mounted widespread backlash as it appears to show the British Prime Minister is in breach of his own COVID-19 rules, as the gathering happened around May 2020 when the UK reeled under a stringent lockdown. The social distancing rules permitted mixing with only one person outside the household at a distance of two meters. Boris Johnson has now spoken out in response to the photograph.

⁦Simple: ⁦@BorisJohnson⁩ doesn’t give a hoot, a fig, a monkey or a damn about you. pic.twitter.com/yelSYKIL0O

When pressed that the Britons are angry and might no longer listen to him or follow rules, as the gathering involved wine and cheesecakes and there were no laptops, notes, or pens, UK PM stressed: "I think it's vital that we focus if we can, on the messages we are trying to get across today. We face a serious spike of Omicron, you see cases going up in London, particularly the cases of hospitalisations, and the answer is to be cautious but also getting vaccinated."

Number 10, meanwhile, defended Johnson in a statement, claiming that the work meetings often took place outside during summer months. UK Prime Minister, when further asked whether it was permitted for the staff to drink during the work meetings, Johnson replied: "I have said what I have to say about that.” At the BBC Breakfast, UK's deputy Prime Minister Dominic Raab said in his televised remarks that sometimes, after a busy working day, “people have a drink and that was not against the regulations.”

But a Labour leader Sir Keir Starmer condemned the so-called work meetings in a statement to the network calling the response ‘a stretch’ and reminding that there were citizens at the time who were unable to attend funerals due to the lockdown. The photograph was shot after a news conference held by then-Health Secretary Matt Hancock. It was taken just hours before Johnson's ex-Health Secretary urged the Britons to “please stick with the rules, keep an eye on your family and don’t take risks” as the first wave of the coronavirus hit Britain. Around 19-20 staff members can be seen drinking wine and having pizza after the press conference. Meanwhile, in a statement to BBC, Number 10 said: ”Downing Street is the prime minister's home as well as his workplace. The prime minister's wife lives in No 10 and therefore also legitimately uses the garden."