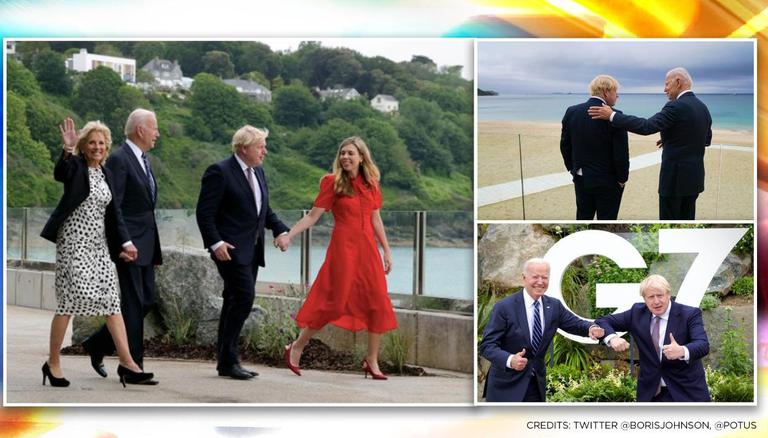 
UK’s Prime Minister Boris Johnson on Thursday hailed US President Joe Biden calling his company "a big breath of fresh air” adding that there was an “absolutely common ground” about the Northern Ireland protocol although the strenuous talks on Brexit arrangements were “avoided”. he, however, lauded that the US president held a similar stance about the UK, US, and EU on preserving the Good Friday Agreement. During their first face-to-face meeting, UK’s leader told the press ahead of the G7 summit that there is so much that the two countries want to achieve together, including on NATO and climate change, which the former US President Donald Trump had a differing view about.

UK’s PM outlined that the US and Britain shared a “special relationship” against the reports of probable flaring tensions due to the ongoing row between the EU and the UK over the Northern Ireland implementation. After holding talks with Biden that went on for nearly an hour and 20 minutes, Johnson said that the two countries covered a “huge range of subjects” and had a fairly diplomatic shared opinion about the post-Brexit issues.

The UK-US partnership is more important than ever as we #BuildBackBetter and greener from the pandemic 🇬🇧🇺🇸 pic.twitter.com/Vhn0URBmpN

“It's wonderful to listen to the Biden administration and to Joe Biden, because there's so much they want to do together with us, from security, NATO, to climate change. And it's fantastic, it's a breath of fresh air,” Johnson told a press conference. When asked by a reporter if the US President who often refers to his Irish roots had expressed objection with UK’s NI stance, Johnson stressed, "No he didn’t.”

UK Prime Minister Boris Johnson’s Brexit treaty has led to continued tensions with Northern Ireland. The Post-Brexit Northern Ireland Protocol has been the catalyst for anger among Belfast’s unionist community due to the Irish Sea trade border policies post-Brexit GB-NI trade deal. Johnson’s post-Brexit deal compels NI to adhere to EU laws as it shares a border with the Republic of Ireland, an EU member.

READ | Joe Biden attacked by cicada ahead of first overseas trip, says 'It just got me'

Eighty years ago Churchill and Roosevelt stood together promising a better future. Today @POTUS Joe Biden and I do the same 🇬🇧🇺🇸

But Johnson had insisted that the Good Friday agreement for NI must be preserved that would keep the border between the Republic of Ireland (in the EU) and Northern Ireland (in the UK) open. The EU however has objected to the agreement stating that the goods need to be inspected when they arrive from a non-EU country. Johnson after the meeting with the US President stressed that the “America, the US, Washington, the UK” both wanted to uphold the Belfast Good Friday Agreement and peace process going. "That's absolutely common ground and I'm optimistic we can do that,” he said.

The newly married UK leader was seen holding hands with his wife along with US President Joe Biden and first lady Jill Biden as they exchanged pleasantries and smiles. "It's gorgeous. I don’t want to go home," Biden reportedly said as he and Johnson along with their wives, Jill and Carrie, were photographed at a St. Ives Bay deck, a stretch of beach overlooking the headlands in southwestern England

In his statement to the British media after their walk, US President Joe Biden said that he told the UK prime minister that they had both “married way above our station,” and that was something the two leaders had in common. Johnson responded to Biden’s statement at a presser stating that he was “not going to dissent from that one”. The two leaders also reportedly launched a task force for the safe resumption of international travel between the UK and the US.