A fight broke out in a London petrol pump after vehicle owners queued up at petrol pumps amid fuel shortages caused by supply disruption in the United Kingdom. 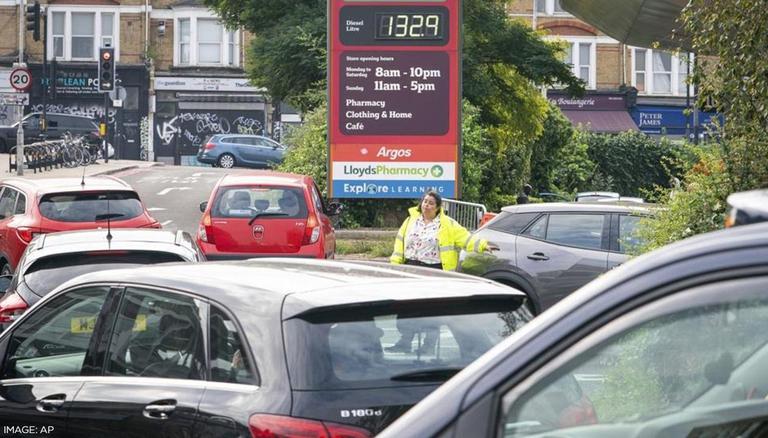 
Amid the supply issues due to a shortage of truck drivers, thousands of British gas stations ran dry on Sunday. Vehicle owners have been forming long lines at the petrol pumps. Some of the drivers started fighting with each other as panic buying has been causing petrol pumps to run dry. According to AP, long queues of vehicles were seen at many gas stations over the weekend and the police were called to one of the London gas stations after a fight broke out.

Reportedly, a fight broke out between moped drivers at a petrol pump as people have been panic buying fuel in Britain. A man reportedly jump-kicked another driver at the forecourt in a petrol pump in London, reported The Sun. The men were separated by the people at a BP garage near Camden, North London. It is not the first time in recent days that the people got engaged in a fight in Britain for fuel. Reportedly, a fight broke out between four men who kicked and punched each other in front of other drivers at an Esso garage in Chichester, West Sussex.

This queue at a South London petrol station goes back over a mile causing gridlock. I walked for 20 minutes and didnot start at the end.
Ironically all their engines are running. pic.twitter.com/377Qtj5C69

A petrol pump in London this morning. pic.twitter.com/HSFhonASR9

People queueing for over an hour in SE London for petrol. Apparently the pumps are almost empty. Total chaos. pic.twitter.com/nOvPoky8Xa

The Petrol Retailers Association, which represents almost 5,500 independent outlets, has informed that about two-thirds of its members had told them that they had sold out their fuel, according to AP. The rest of the members had informed that they were "partly dry and running out soon". Association chairman Brian Madderson has pointed out that the shortages of fuel were caused by "panic buying, pure and simple", AP cited BBC report. The haulage industry has noted that the UK is facing a shortage of thousands of truck drivers. The United Kingdom government has announced that it will issue thousands of emergency visas to foreign truck drivers. Furthermore, the government has added out that it would issue 5,000 three-month visas for truck drivers and 5,500 visas for poultry workers.